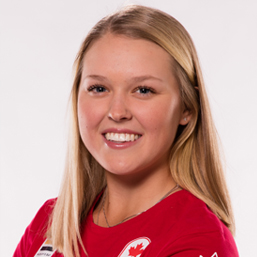 Brooke Henderson is constantly making history. Most recently it was her victory at the 2016 KPMG Women’s PGA Championship, making her the first Canadian woman to win a golf major since 1968. At 18 years and 10 months, she was the second-youngest women’s major winner ever and the youngest winner of that tournament since it began in 1955. She rose to second in the World Golf Rankings, the best ever by a Canadian (male or female). In September 2014 Henderson became the first Canadian to be ranked number one in the Women’s World Amateur Rankings. With more than 50 amateur victories to her credit, she turned pro in December 2014. Henderson earned her first pro win at the 2015 Four Winds Invitational in June, becoming the third-youngest winner in Symetra Tour history. Following the victory, her waiver petition to join the Symetra Tour before age 18 was accepted. She went on to finish tied for fifth at the US Women’s Open and earn her first LPGA Tour win (by 8 strokes) as a qualifier at the Cambia Portland Classic in August, a title she successfully defended in 2016. Canada’s first LPGA Tour victor since Lorie Kane in 2001, Henderson’s petition for LPGA Tour membership was granted and she made her official Tour debut at the Canadian Pacific Women’s Open. She went on to win the Bobbie Rosenfeld Award as Canadian Press Female Athlete of the Year. Henderson was the low amateur (tied for 10th) at the 2014 US Women’s Open, which earned her entry into two 2015 majors: the US Women’s Open and the ANA Inspiration Championship. Henderson has two tournament wins on the Canadian Women’s Tour, including one in 2012 when she was 14 years, 9 months and 3 days old, making her the youngest player (male or female) to ever win a professional golf event. She was also victorious at the 2014 PGA of Canada Women’s Championship. Henderson led Canada to a silver medal at the 2014 World Amateur Team Championship and finished second at the 2014 US Women’s Amateur. She finished fourth at the 2014 World Junior Girls Championship.

Family: Parents David and Darlene Henderson… Older sister Brittany is her role model and often caddies for her; she also competes on the Symetra Tour…Getting into the Sport: Started playing golf at age 3 because she wanted to join her father and sister on the course… First thought the point of the game was to get the ball in the cup fastest, so she’d run down the fairway and hit many balls quickly instead of taking fewer accurate shots… Always dreamed of playing professionally but at age 14 it became a clear goal when she won her first pro event… Outside Interests: Had been planning to attend the University of Florida but turned pro instead… Graduated from Smiths Falls District Collegiate Institute in 2015… Enjoys watching movies to relax… Used to play goalie in travel hockey… Odds and Ends: Favourite pre-competition meal is an omelette with peppers, ham, tomatoes, and a bowl of fruit… Favourite cheat meal is pizza, chocolate cake and chocolate ice cream…  Nicknames: Brookster, Brookie…