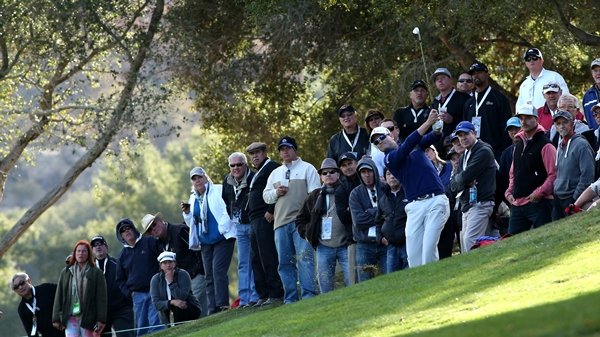 THOUSAND OAKS, Calif. — Zach Johnson already is looking ahead to next year, and one of his priorities is to score better on the par 5s. He got started on that Thursday in the World Challenge.

Johnson birdied four of the five par 5s on a chilly afternoon at Sherwood Country Club, sending him to a 5-under 67 and a one-shot lead over Matt Kuchar. They were among only five players in the elite 18-man field who broke par.

One of them was tournament host Tiger Woods, who had a new driver in the bag and missed only two fairways. The problem was his putter. Woods opened his round by missing a short par putt, and he finished it by missing a four-foot birdie putt on the 18th. He wound up with a 71.

Kuchar played with Woods — they were partners at the Presidents Cup — and hit his approach into two feet for birdie on the final hole.

Hunter Mahan and Bubba Watson were at 70. They are among seven players who have yet to win a tournament anywhere in the world this year, even though all 18 players in the World Challenge are in the top 30 in the world ranking.

The tournament counts toward the ranking, though everything else about it is unofficial. For some players, it’s a time to shake off some rust and test new equipment. For others, it’s the end of a long year.

Johnson had his annual “summit” with his team of coaches at the start of the week. They go over the year, crunch statistics and lay out goals for where to improve in 2014. One of the areas was par-5 scoring.

“A highlight that we’re looking into next year is trying to play those holes a little bit better,” Johnson said. “I don’t know what I did that today. I hit it close. I had good shots in there with the proper spin, nothing more than that. But you’ve got to take advantage of them. You’ve got five of them. The thing is … one errant shot, you’re staring a six right in the face, if not more. There’s a lot of penal areas.”

There was plenty of punishment for some players in the field.

Steve Stricker was among those under par until a bogey-bogey-double bogey finish put him at 75. Jordan Spieth, coming off a sensational rookie season and playing for the first time since the HSBC Champions in Shanghai a month ago, had a 77 and was last in the field. Jason Day, who won the individual and team title at the World Cup two weeks ago at Royal Melbourne, had a 76.

Rory McIlroy, with girlfriend Caroline Wozniacki following him, was hopeful of building momentum from his first win of the year last week in the Australian Open. He missed a few short putts, found the water on the par-3 15th and had a 73. He played with defending champion Graeme McDowell, who had a 72.

McDowell saw a note that his last eight rounds at Sherwood were in the 60s. That streak ended Thursday, though for good reason.

“The course hasn’t been this tough in a couple years,” McDowell said. “The scoring reflects that. The greens are much firmer. The speed of them caught me by surprise a little bit today. My speed was a little clumsy, and it showed today on the greens.”

This is the final year the tournament is being played at Sherwood. It moves to Isleworth just outside Orlando, Fla., next year.

Woods has played only one tournament since the Presidents Cup, and that was a tie for third in the Turkish Open. He said he struggled with his irons — even though he missed only two fairways, he hit only 12 greens — and couldn’t get enough putts to fall.

“I made a few mistakes today,” Woods said. “I also hit a couple of good shots that ended up in some interesting spots. That can happen out there. I shot about the score … maybe could have gotten one or two more out of it.”

Johnson had few complaints. He opened with two birdies, and then surged ahead on the back nine with five birdies in a seven-hole stretch, three of them on the par 5s. Johnson has a pair of runner-up finishes at this event, and with the tournament moving, this is his last shot at Sherwood.