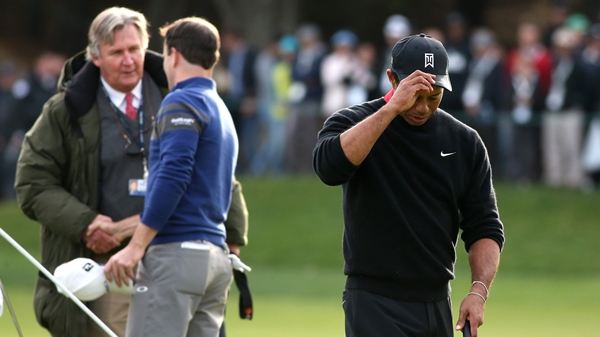 THOUSAND OAKS, Calif. – Zach Johnson put together the storybook finish at Sherwood on Sunday that for the longest time belonged to Tiger Woods.

Johnson rallied from four shots behind with eight holes to play, holed out from a drop area for par on the last hole to force a playoff, and beat the No. 1 player in golf at the World Challenge when Woods missed a 5-foot par putt on the first extra hole.

“Pretty impressive what he did,” Woods said. “He got me.”

It was an extraordinary sendoff at Sherwood, which hosted the World Challenge for the 14th and final time before it moves to Florida next year.

The big surprise was the winner in so many ways.

“I feel very fortunate, and a bit lucky,” said Johnson, who moved into the top 10 in the world ranking for the first time in his career.

For Woods, it was only the fourth time in his career that he lost a lead of at least two shots going into the final round, the second time at Sherwood. Graeme McDowell overcame a four-shot deficit in 2010 and beat Woods in a playoff.

This was far more dramatic.

They were tied after Johnson hit his tee shot to 4 feet for birdie on the 17th hole. Playing from the left rough, Woods came up just short and watched his approach tumble down the elevated green and into the bunker. Johnson followed with his worst shot of the week, an 8-iron so weak that it came up well short and into the hazard.

Johnson knew Woods had a difficult bunker shot, and if he figured if he could stick his wedge close from 58 yards away in the drop zone, a bogey might be enough to get into a playoff. The ball bounced three times and then spun back a few inches into the cup for an unlikely par and a 4-under 68.

“A little too dramatic for me,” Johnson said.

Woods was between clubs from the 18th fairway in the playoff and tried a smooth 7-iron that he lost enough to the right that it again found the bunker. He hit an exquisite sand shot, this one sliding 5 feet by the hole, and the par putt spun out of the left side.

Johnson won $1 million and should go to No. 9 in the world.

Woods ended what he called a “damn good year” _ five wins, the most of anyone in the world _ with a shocking loss to Johnson. Two years ago, Woods ended the longest drought of his career when he went birdie-birdie at Sherwood to beat Johnson by one shot.

The attendance Sunday was 24,922, a record for any round in 14 years at Sherwood. Traffic outside the tony club in the Santa Monica foothills looked like an LA freeway in what could be the last chance in the near future to see Woods in southern California.

Woods appeared to have his sixth title at Sherwood sewed up when Johnson missed a short par putt on the 10th hole to fall four shots behind with eight holes to play. Woods had said on Saturday that Johnson wasn’t the kind of player who went away easily, and he was right.

Johnson picked up birdies on the 11th and 12th holes, and then got back in the game on the 14th when Woods three-putted from long range on the 14th, and Johnson saved his par with an 8-foot putt to get within one shot.

The rest of the way looked like the final rounds of a heavyweight fight, even if only one of them looked the part.

Johnson laid up on the par-5 16 and nearly holed a sand wedge from 88 yards, setting up a tap-in birdie. Woods, with a tough chip left of the green, rehearsed the shot over and over and it came out perfectly for a matching birdie. Johnson finally caught him with a tee shot to 4 feet for birdie on the 17th, leading to the big finish.

Johnson looked almost apologetic when Woods missed his par putt in the playoff, and it was shocking to see. No one from his generation as made more clutch putts than Woods, who spoke about the topic earlier in the week.

But not this time. It was not the way he wanted to leave Sherwood, where Woods has five wins and now five runner-up finishes. The only consolation was $400,000 for finishing second, bringing to just over $14 million the earnings he has donated to his foundation from the three tournaments (AT&T National, Deutsche Bank, World Challenge) that support his education programs.