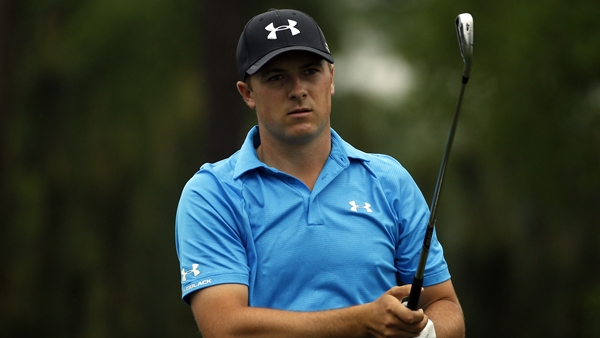 AUGUSTA, Ga. –  Jordan Spieth speaks with reverence when hanging out with the greats of the game at Augusta National.

But, in his first trip to the Masters, Spieth feels he’s got as good a chance as anyone to capture a green jacket.

That’s the way it is with these kids today.

A new wave of 20-somethings is taking golf by storm, eager to make their mark and not at all beaten down by the aura of Tiger Woods, who hasn’t won a major championship since 2008 and isn’t even at Augusta this week as he recovers from the latest in a series of injuries.

Nine players under the age of 30 have won PGA Tour events since the official start of the season last fall, including a pair of victories by brash 23-year-old Patrick Reed.

That list doesn’t even include perhaps the best of the youngsters: Rory McIlroy, already a two-time major champion at age 24, and Spieth, who last summer became the youngest Tour winner since the Depression before he even celebrated his 20th birthday.

“It helps me when I’m on the course when I can see younger and younger guys winning golf tournaments,” Spieth said. “I believe that it doesn’t take as much experience as maybe guys would have thought five years ago, six years ago.”

“I’ve been watching these young guys,” Palmer said Tuesday, “and it’s amazing how they hit the golf ball, how well they play. I’ve never ceased to be pleased and surprised to see the physical conditioning that these young people are coming with, to see their ability, to see how they play the game.

Spieth credits players such as Woods and Phil Mickelson for inspiring this new generation _ and not just in the United States. Look at someone such as Japan’s Hideki Matsuyama, who turned pro a year ago and, before the season was done, had tied for sixth at the British Open.

He’s only 22, and getting ready for his first Masters as a paid player.

“Everybody in the field has a chance to win it,” said Matsuyama, who was the low amateur at the 2011 Masters. “I feel like I’m one of those, too, that has a chance.”

Spieth feels the same way, even though he’s playing the Masters for the first time.

The last Augusta rookie to claim the green jacket was Fuzzy Zoeller in 1979. The only other ones to do it were the first two winners: Horton Smith in 1934 and Gene Sarazen in ’35.

“It’s getting younger,” Spieth said, talking about the potential contenders. “The game is getting better, younger, and vastly spreading to different and more places. I think that we’ll continue to see younger and younger players step up and be able to win early, such as we have.”

Reed is as confident as anyone. He’s won three times in seven months going back to last season, including a World Golf Championship, and declared on national television that he already feels like one of the top five players in the world.

For the record, the Masters will be his first major.

Of course, if he was a betting man, he’d be betting on himself.

“Experience always helps,” Reed said, “but at the same time, with how many young guys are coming out and winning and all that kind of thing, I feel like … whoever it playing the best – whether you have experience or don’t – is going to pull off a victory.”

Woods’ troubles – personal issues, a body that’s starting to break down, the longest drought of his career in the majors – has certainly contributed to that new swagger among the youngsters.

There were plenty of talented players who came along at the same time as Woods, but they knew their chances of winning the biggest tournament were pretty much nil when he was on his game.

Now, there’s no such roadblock standing in the way.

These guys feel like they can win any tournament.

“It’s changed now,” Spieth said. “With the younger guys not being scared to win, I think that can only be better for the game.”