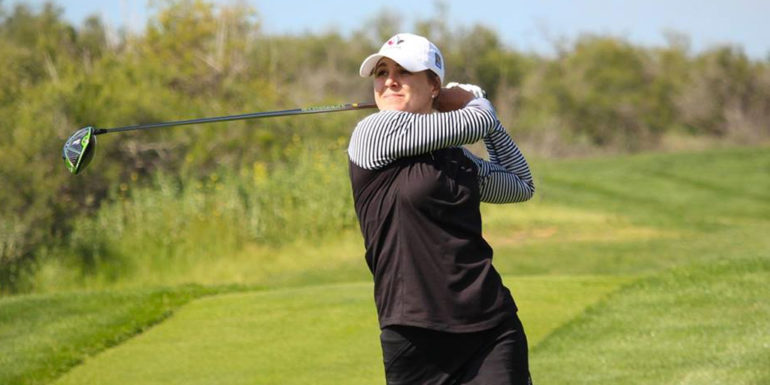 BEAUMONT, CALIFORNIA, March 25, 2017 – Anne-Catherine Tanguay (Quebec, Canada) and Daniela Darquea (Quito, Ecuador) made 13 total birdies while playing in the same group on Saturday and both moved into a share of the lead at 7-under, 137. Later in the day, Briana Mao (Folsom, Calif.) posted a 4-under, 68 to get to 7-under. Tanguay, who has six career top 10’s including a T10 to open the year at the Florida’s Natural Charity Classic, posted a 4-under, 68 while Darquea, a rookie playing in just her second career event, turned in a 5-under, 67.

There are five players just one off the lead including Burbank native Emily Tubert. There are 11 players within three shots of the leaders.

“I just really got my putting going today, I made a bunch of 10 and 12 footers,” said Tanguay, who attempted 29 putts. “I made some up-and-downs on the par 5’s, which was key so overall it was a solid round.”

Tanguay decided this past offseason to stay in Florida to prepare for the season and said it was her best offseason to date. She only took about a week off.

“Two weeks before the season started, I was getting itchy to play because I’ve worked a lot on short game, chipping and putting and made some equipment changes that are helping my game,” said Tanguay. “I got some new wedges and I got some more distance off the tee with a new driver.”

Tanguay also said that she will have her boyfriend on the bag full-time this year and the duo works well on the course.

“It gets stressful sometimes on the road and it is good to have someone that helps me relax,” explained Tanguay. “He knows my game well, he knows me well and I think we make a great team on the course.”

The 26-year-old has made ten birdies against just one bogey this week. She did have a double bogey on Saturday on the 17th hole.

Tanguay’s low finish on Tour is a tie for fourth. She’ll go for her first win on Sunday.

“My mission this year is to be a little lighter on the golf course and have more fun,” said Tanguay. “It’s definitely nice to be in this position and I’ve been here before and I know how it feels and I think I can do better this time around.”

Darquea will try to become the first player from Ecuador to ever win on the Symetra Tour.

“I putted really well today,” said Darquea, who finished 17th in her pro debut at the Florida’s Natural Charity Classic. “On the 20-footers and in I made a lot of them, however on the really long putts I wasn’t as confident. I actually three-putted three times.”

Darquea, who took medalist honors at Stage I of LPGA Qualifying Tournament in 2016, turned professional after three seasons at Miami.

“I’m super excited how I am playing,” said Darquea. “I love to play golf and so far the start to my

professional career has been fun. I’m really happy that I am playing well.”

When Darquea was little, her parents bought a membership to a golf club in Quito and she started playing when she was four years old.

“I just fell in love with the game and I couldn’t stop playing,” explained Darquea. “I went to college and then turned professional so golf has pretty much been my entire life.”

Darquea said that taking advantage of the par-5 holes will be critical on Sunday.

Mao, who trains in Palm Desert at La Quinta PGA West, made four birdies over her first seven holes and five total for a 68.

“I was hitting it really well and had a lot of good looks including birdie opportunities on each of the first six holes,” explained Mao. “I was feeling good going into the back nine, but just kind of lost my rhythm. I started swinging too fast and missed some fairways.”

Just like Tanguay and Darquea, Mao will also go for her first win.

“I’m going to go work on ball striking a little and then I’ll be fully prepared for Sunday,” said Mao, an All-ACC performer at the University of Virginia. “There are a bunch of good players towards the top so who knows what will happen.”

EMREY POSTS CAREER LOW ROUND: Allison Emrey (Charlotte, N.C.) carded a career low 6-under, 66 on Saturday to jump from T33 to a tie for fourth at 6-under for the tournament.

She made seven birdies against just one bogey.

“I played really consistent and I hit the ball well and capitalized on that and made the putts,” said Emrey, who attempted 28 putts. “I had a great group and we were talking all day so that put me at ease.”

The 23-year-old finished 51st on the Volvik Race for the Card money list as a rookie and feels ready to improve upon that.

“I feel like it is definitely easier your second year because you’ve seen all the courses before and you know all the players and you know what is going to happen each week,” explained Emrey. “I’m staying with my same host family from last year so it is really nice to come back to Beaumont.

She will likely improve upon her finish last year at Morongo Golf Club at Tukwet Canyon when she closed T55.

LACROSSE GETTING CLOSE AFTER NEARLY A YEAR OFF: Cindy LaCrosse, who won three times on the Symetra Tour in 2010 and has made 88 career starts on the LPGA, feels her game is headed in the right direction. This week is a good sign as she posted a 2-under, 70 on Saturday and stands at 6-under, 138.

“I played really well, if a few more putts had dropped it could have been even lower,” said LaCrosse, who only played in two Symetra Tour events last year. “I’m hitting the ball really well and I’ve done a lot over the last year with swing changes and they are really starting to feel comfortable.”

LaCrosse played in the first Symetra Tour event last year and then withdrew from the rest to make big changes. She started working with Justin Sheehan out of Tampa, who also coaches Brittany Altomare and a few other professionals.

“I told him that I’ll do whatever you tell me with the golf swing so it took a long time,” said LaCrosse. “Even at Q-School, I was still uncomfortable. I knew if I wanted to keep playing I needed to do something drastic.

FRANCE’S RICORDEAU PLAYING SYMETRA TOUR FOR FIRST TIME: Marion Ricordeau (Laon, France) posted a 1-under, 71 to move to 3-under for the tournament. She played six years on the Ladies European Tour (LET) and then earned partial LPGA Tour status through Q-School in 2015 and played the LPGA in 2016. She finished T23 at the LOTTE Championship in Hawaii, but struggled the remainder of the season. She has decided to focus on the Symetra Tour in hopes of returning to the LPGA.

“I tasted it (LPGA) and I loved it so obviously I want to try and get there again,” said Ricordeau, who made 14 starts on the big tour last year. “I want to do my best each week to try and get my card through Symetra (Tour), if not then Q-School.”

Ricordeau finished 48th on the LET Order of Merit in 2015 when she last played in Europe. She has three career top 10’s on the LET.

“It’s pretty motivating on the LPGA when you can’t play average to make a living, you have to give your best every week,” explained Ricordeau. “I started to work (on my game) more than I ever have in the past because I had to against the competition.”

Ricordeau confirmed that she likely won’t play in many LET events because she doesn’t want to travel back-and-forth between the states and Europe.

During off weeks, Ricordeau will spend time with her coach, Patricia Meunier-Lebouc, in Jupiter, Florida. Meunier-Lebouc won twice on the LPGA Tour including the 2003 Kraft Nabisco Championship.

• Rookie Lindsey Weaver, who finished fourth at the Florida’s Natural Charity Classic, is ninth heading into the final round at 5-under, 139.