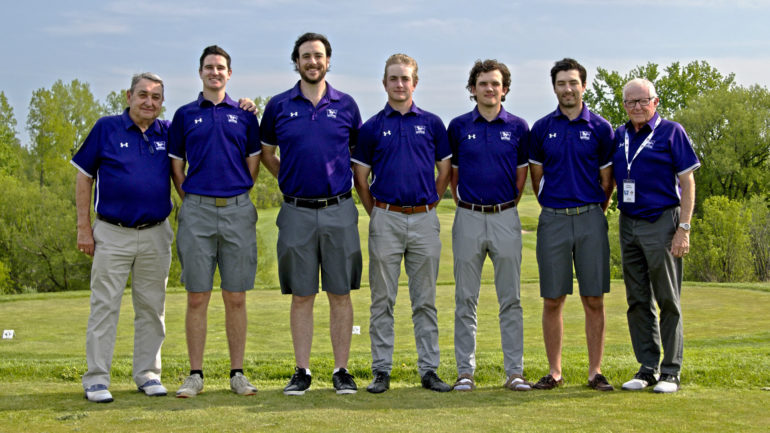 KOMOKA, Ont. – The Western University Mustangs and the Université Laval Rouge et Or remained atop the leaderboard in the men’s and women’s team divisions, respectively, after the second round of the Canadian University/College Championship at FireRock Golf Club on Wednesday.

The duo of Charles Fitzsimmons and Jackson Bowery finished in first and T3 individually, helping the Mustangs to an 11-under-par 565 for the tournament, seven shots ahead of the University of British Columbia (UBC) Thunderbirds in second place. In the women’s division, Catherine Gariépy put together another solid round, leading Laval to a score of 19 over par through two rounds, nine shots ahead of runner-ups Victoria Vikes.

Fitzsimmons, who is from London, Ont., held a share of the lead heading into round two, and carded 4-under-par 68 to give himself the outright lead. Fitzsimmons is two shots ahead of Guelph’s Josiah Dixon, who moved into second place with a 5-under-par 67, the lowest individual men’s score in round two.

Three players trail Dixon by one shot for second rank; Bowery, Andrew Harrison (UBC) and Gordon Gibson (University of Toronto). All three sit at 4-under par for the tournament.

Gariépy of the Rouge et Or took over first place in the women’s individual standings. Her 5-over-par performance through two rounds gives her the lead, trailed closely by Victoria’s Sukriti Harjai (+6). Gariépy’s Laval teammates Noémie Ouellette and Florence Leduc fired the low rounds of the day at even par (73).

The women’s and men’s Individual winners receive an exemption into their respective Canadian Amateur Championship.

Click here for more information on the event, including tomorrow’s tee times and full leaderboard.