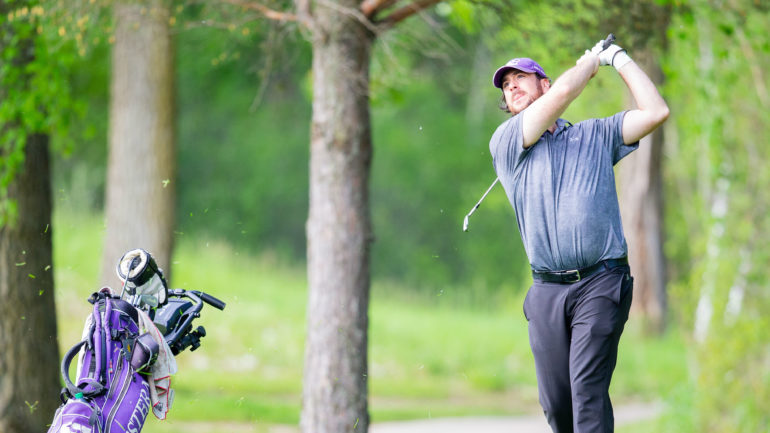 KOMOKA, Ont. – The skies remained overcast, and Western and Laval stayed on top of the leaderboard for the third consecutive day in the men’s and women’s divisions, respectively, at the Canadian University/College Championship at FireRock Golf Club Thursday.

The Western University Mustangs maintained their lead atop the standings after round three, thanks to Charles Fitzsimmons, who shot an even-par 72 and Jackson Bowery, who signed a 1-over-par 73 scorecard. The Mustangs now sit at 8-under for the tournament, six shots ahead of the University of Victoria Vikes. At one point in the day, the Mustangs’ lead over the Vikes was 12 shots.

“I’m thrilled with the way we’ve played this week,” said Western men’s golf head coach Jim Waite. “We played superbly the first two days. We hit a bit of a hiccup today, which brings us back to the field. It will be on us tomorrow to do it again with people behind us.”

In the women’s team division, Laval’s Catherine Gariépy and Anais Galas both shot four-over on day three, helping to maintain the Rouge et Or’s cushion over the field. The three-time defending champion University of British Columbia Thunderbirds are six shots behind Laval, at 40-over.

Fitzsimmons continues to lead the men’s individual competition at 7-under, but two of his opponents rocketed up the leaderboard. Mackenzie Dasti (Ontario Tech University) now sits one shot back after shooting 4-under 68, and Baptiste Mory (Laval) is at 5-under.

In the individual women’s division, Gariépy of Laval leads by two strokes after carding a 4-over 77 in round three, and the leaderboard is tight behind her. Sukriti Harjai (University of Victoria) and Shania Remandaban (University of British Columbia) sit at 11-over on the tournament, two shots back of Gariépy heading into the final round.

The Women’s and Men’s Individual winners receive an exemption into their respective Canadian Amateur Championship.

Click here for more information on the event, including tomorrow’s tee times and full leaderboard.