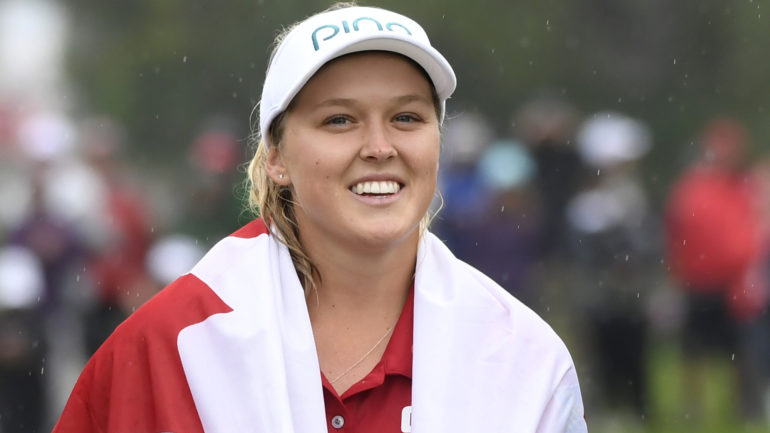 Once a beacon of inspiration for men’s golf in Canada, Mike Weir believes Brooke Henderson can be the same for the women’s game – and she will “blow past” the all-time mark for top-flight tour wins by a Canadian in the process.

Weir returned to his hotel after hiking in southern Utah on Sunday to the news that Henderson had won the CP Women’s Open. That put the 20-year-old Henderson at seven LPGA wins, just one back of the record for most victories by a Canadian at a top-level tour held by Weir, George Knudson and Sandra Post.

“I hope it makes a difference in Canadian women’s golf,” Weir said in a phone interview. “She’s such a young person herself, so hopefully that means young girls and teenagers will take up golf and we get the women’s game growing even more.”

Weir, the 2003 Masters champion, was the last Canadian to win a PGA or LPGA event on home soil when he picked up his first PGA Tour victory at the now-defunct Air Canada Championship in 1999. The native of Brights Grove, Ont. had an infamous near miss at the 2004 RBC Canadian Open, losing in a playoff to Vijay Singh.

Henderson, of Smiths Falls, Ont., shot a 7-under-par 65 Sunday at Wascana Country Club in Regina to beat Angel Yin by four shots. At one point in the back nine, Yin made three birdies in a row. Henderson matched her shot-for-shot, making four straight birdies.

PGA Tour golfer Graham DeLaet of Weyburn, Sask., took to Twitter on Thursday to say Henderson was “single-handedly changing the game of golf for young girls in Canada” like Weir did in the early 2000s.

“The way she swings the club and how dynamic her movement is with her swing, she may be the most athletic woman out there from what I’ve seen,” said Weir. “But it’s the mental side. A girl makes three birdies on her and she makes four? That shows something not only with her athleticism but what’s inside, and what she thinks about the game, how she’s able to handle herself in a tough situation.”

Weir said he still remembers the roars from his Air Canada Championship victory, and outside of the Masters it was as loud a crowd he’s ever had cheer him on. He called it an incredible feeling.

“When I won in Canada, it wasn’t the Canadian Open but it felt like a major because the crowd is so big and so behind you. The energy feels like a major,” he said. “I’m sure (Henderson) felt that.”

Weir’s life changed after his Masters victory in 2003, as he climbed as high as No. 3 in the Official World Golf Ranking. He said he’s not sure Henderson’s life will change that much after the CP Women’s Open victory – since she’s already got a major win and is an established player, he said – but it will be important for her confidence.

“This is huge for her for sure, and her game going forward,” he said.

Henderson returns to action this week on the LPGA Tour at the Cambia Portland Classic, an event she’s won twice in her career. She also said Sunday she’s got a lot of confidence as she heads into The Evian Championship, the LPGA Tour’s final major.

“I’ve had two wins the last couple seasons, so I wanted to keep that streak going, so I’m happy that I did,” she said. Hopefully I can look forward to getting a third win this season.“

Weir believes Henderson’s win on the biggest stage in Canadian women’s golf could be the start of a “special” run.

“I want her to keep having fun, play aggressively, and not take it as pressure but ‘let’s just see how good I can get.’ Whether that’s two or three wins a year or seven or eight or nine, maybe she’ll rattle off one of those years like one of the all-time greats Tiger (Woods) or Annika (Sorenstam),” said Weir.

“She has the talent, and that’s a real possibility.”