Vandette extends lead, Dao and Lau tied after round two of Canada Games 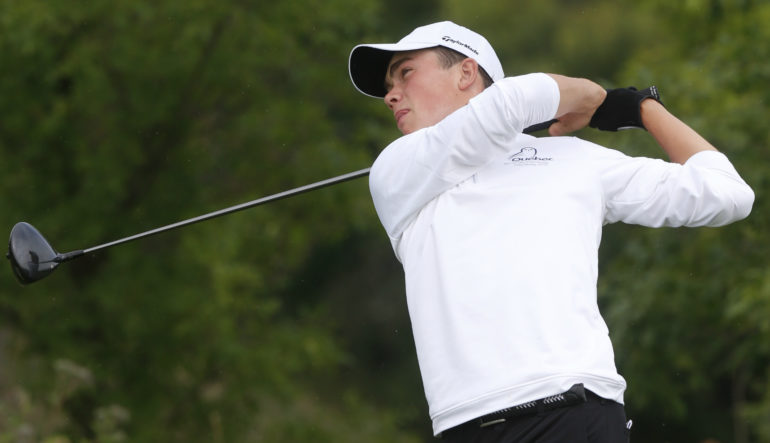 Quebec continues to lead the way after round two of the Canada Games with Beaconsfield’s Christopher Vandette and Céleste Dao from Notre-Dame-de-L’Île-Perrot leading the way.

Teeing off in the first group of the day following a four-hour weather delay, Vandette came out firing with an eagle and a birdie in his first four holes to card a 3-under-par 69.

“You can’t spend too much energy during delays,” said Vandette, the 36-hole leader. “I was trying to keep my energy up, and I ended up being able to go out and start well.”

The 16-year-old was steady the rest of day pouring in two more birdies and making just one bogey. His scrambling was what kept his momentum going.

“I missed it in the right spots,” added Vandette. “Then I was able to get up and down from there.”

Ryan McMillan from Winnipeg is in sole possession of second, five shots back of Vandette at 3 under par after carding an even-par 72 in round two.

Quebec is leading the boys team competition at 8-under-par 280. B.C. is second at 1 under par and Alberta is third at even par.

“We’ve never won gold before so it’s a pretty cool feeling,” said Vandette. “I’m pretty pumped about it so hopefully we can keep it going the next two days.”

On the girls side, 2017 Quebec Junior Girls champion Dao  had two birdies in round two and the only blemish on her card was a bogey on No. 15.

“I tried to keep it simple with my shots. Pars were good for me,” said Dao. “I was bogey-free on the first nine so I was happy with that, and I was really confident in my putting today.”

Co-leader Alisha Lau (Richmond, B.C.) struggled on the front nine in windy and wet conditions, going out in a 1-over-par 37. But she chipped in for birdie on No. 10 and got the ball rolling from there.

“I was in a bit of a groove after that and feeling it,” said Lau. “I got into a good rhythm and I was confident on the back nine. I hit some good shots that gave me good opportunities I was able to convert.”

The 2017 B.C. Junior Girls champion closed with a 2-under-par 34 on her second nine recording four birdies along the way to card a 1-under-par 71 in round two.

Ellie Szeryk from London, Ont., is in the bronze medal position at 3 over par.

“I’m very happy to have an under-par score for my teammates,” said Dao. “Yesterday Sarah-Eve (Rheaume) had a 4 under par round and I was so happy for the team. I hope we can keep it up.”

Quebec is looking to become the first province other than B.C. to win gold in the boys or girls team competition.