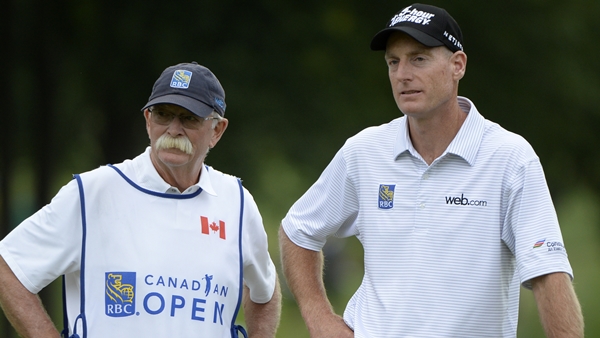 MONTREAL – There doesn’t appear to be any stopping Jim Furyk from claiming a third RBC Canadian Open title.

The 44-year-old Furyk steamrolled his way to a bogey-free 65 in the third round at Royal Montreal on Saturday to go to 15-under-par 195 and take a three-shot lead over South African Tim Clark, while crowd favourite Graham DeLaet of Weyburn, Sask., saw his hopes sag with a three-putt on the 18th to fall seven strokes off the lead.

A forecast of thunderstorms may complicate the final round on Sunday, but Furyk is in solid position for his first PGA Tour win since the Tour Championship in 2010.

He said a key to closing out the US$5.7 million tournament will be “not really worrying about what position I’m in. Not looking at the leaderboard too much. Going out there and trying to attack the golf course the same way I have the first three days.

“I noticed there aren’t many leaderboards on the course, that might be a good thing.”

Clark had the low round of the day at 64 to move to 12-under. Stanley has been near the lead all week and shot 68 to take third place at 10-under par.

Furyk is a 16-time winner on Tour and will have the edge in experience. But he cautioned that the soft greens and fairways at Royal Montreal have made for low scoring and that anyone close is a threat.

“The guys that are out there who have played well for three days are all capable,” said Furyk. “Timmy Clark’s got a lot of experience. Kyle’s won before.

“The guys out there have all played well. They’ve played good rounds. You saw Graham and I shoot 7-under (on Saturday). There is a good round out there, so guys can go out there and shoot a low one and definitely put heat on the last group.”

Jamie Lovemark, whose best finish so far this season was a tie for 28th in January, shot 67 to take fourth place at 9-under.

But the galleries were watching DeLaet, Canada’s top player who is trying to become the first Canadian to win his national open since Pat Fletcher in 1954.

But after raising hopes as he and Furyk tied the course record playing together with Matt Kuchar in the second round, he managed only an even-par 70 to stay at 8 under in a tie with Joe Durant (67), Scott Brown (69) and Tim Petrovic (72).

The 32-year-old DeLaet missed a par putt on the second, but kept himself afloat until he sank a long putt for eagle on the par-5 12th. He followed with a birdie on the 14th to get to 10 under, but then put his tee shot on the 15th into a hazard for bogey.

The crowd gave him a rousing ovation as the bearded DeLaet walked up the 18th fairway, but he got too aggressive on a 9-foot birdie putt and then missed a short one for par.

“I kept plugging away,” said DeLaet. “I knew I wasn’t that far off and if I could just finish a couple under par maybe I’d have a shot (on Sunday.)

“Disappointing to three-putt the last. I really wanted to make that birdie and got over-aggressive. But it was a fun day. The crowds were amazing out there. Hopefully, I can do something special.”

If DeLaet was dejected or angry at himself, it didn’t show when he met the media off the 18th green. And he wasn’t about to concede defeat despite the gap with the leaders.

“Jim is obviously in control of his game right now, but if someone posts something you never know what could happen,” he said. “I’m just going to give it my best. I’ve got 35 million people pulling for me, so that’s pretty cool.”

Furyk won the world’s third-oldest national championship in 2006 at the Hamilton Golf and Country Club and followed with a win in 2007 at Angus Glen in Markham, Ont.

Coming off a final round 65 to finish fourth at the British Open last Sunday, Furyk has had only one bogey, on the fourth hole of the first round, at Royal Montreal.

The third round was more complicated, but he cited up-and-down saves for par on the first, sixth, 11th and 16th for keeping his hot play alive.

“The first couple of days I struck the ball really well and never had myself in too much trouble,” he said. “Today I found a way to score and get the ball in the hole.”

In his career, Furyk has won 10 of 25 times when leading after three rounds.

Clark got off to a phenomenal start, with a birdie on the first and an eagle on the second, and then ran off three birdies on the final six holes. The 38-year-old’s experience likely makes him the most dangerous challenger.

“It’s always great to get off to a good start,” said Clark. “Saturdays are normally the toughest day to score on, so you dream of a start like that.”

Clark is coming off a strong showing at the John Deere Classic, where he tied for fifth, helping to turn around a middling season that included a problem with his left elbow that needed a cortisone injection.

“Right now I feel good and I am able to swing how I want to,” he said. “Three months ago I started to hit the good again, but I just wasn’t scoring. Finally, the last few tournaments, I’ve started to score.”

With thunderstorms in the forecast, start times were moved up two hours to 8 a.m. ET, with the players in threesomes rather than the usual pairs for the final round. The third round was played in breezy, overcast weather, with only a brief, light rain in the afternoon.

Amateur Taylor Pendrith of Richmond Hill, Ont., rebounded from a 75 on Friday with a 68 to go to 2 under. He was 4 under through 17 holes, but the big hitter put his tee shot in a hazard and hit a weak chip shot for double bogey on the 18th.

He was happy with his week so far however, which included an opening-round 65.

“Just getting out here and experiencing what the PGA guys experience every week is pretty awesome,” the 23-year-old said. “My goal for the week was just to come out here and have some good rounds.

“Just like any other tournament, if I play good I’ll make the cut. I had a good day and a bad day, but I made the cut, which was awesome. It’s great to play two more rounds on the weekend.”

Mike Weir of Bright’s Grove, Ont., was 1 over on the day and for the tournament.

“No bogeys out here with the wind blowing a bit – I played nicely,” said Fritsch, whose sand shot on the 18th helped save par. “Burned the edge a lot today, but I also had some good up and downs.

“It was nice to get up and down on the last, just to make sure it was bogey-free.”