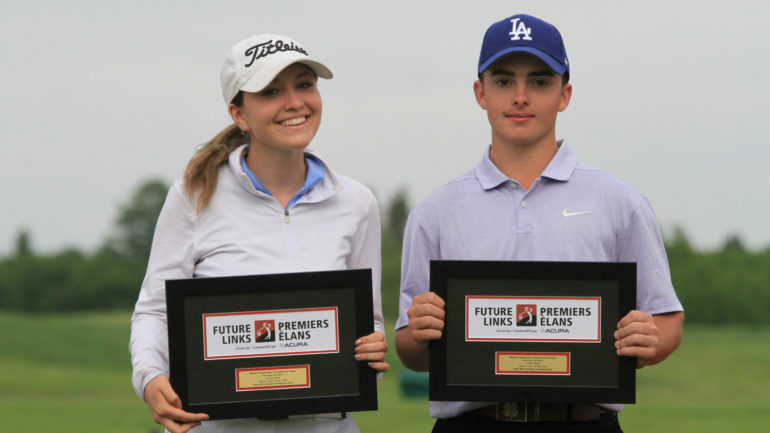 PONOKA, Alta. – Calgary natives Annabelle Ackroyd led wire-to-wire, while Tommy McKenzie was clutch in the final round to win their respective divisions at the Future Links, driven by Acura Western Championship at Wolf Creek Golf Resort on Sunday.

held the lead entering the final day at Wolf Creek, but had to overcome three bogeys on the front nine to close out the victory. The 17-year-old flipped the script on the back nine, notching four birdies and no bogeys to finish at 1 over par for the 54-hole tournament, four shots ahead of runner-up Grace Bell.

“I didn’t play as well on the front nine as I wanted to,” said Ackroyd. “I stayed patient out there. I was in the same situation last year; having the lead heading into the back nine. I think that helped me just staying calm out there.”

A Calgary native, Bell trailed Ackroyd by one stroke heading into the final round, and briefly led on the front nine. She finished in second at 5 over par.

In the junior boys’ division, McKenzie was clutch in the closing stages of the final round. The Calgarian worked around a double bogey on the first hole to finish the day with a 72 (+1), 5 over par for the tournament.

McKenzie made par-or-better on each of his last 13 holes, securing his victory with a par putt on the 18th hole.

“I had a double-bogey on the first hole when I hooked it right into the trees,” said McKenzie. “I just made sure I stayed calm and stayed focused. I wanted to play my game and not worry about anybody else.”

Ethan Choi of Pincher Creek, Alta., led for the majority of the final round, but ultimately finished in second place at the Future Links, driven by Acura Western Championship for the second consecutive year. He finished 6 over par during the 54-hole tournament, tied with Carter Graf (Sylvan Lake, Alta.), Brady McKinlay (Lacombe, Alta.) and Dustin Franko (Delta, B.C.).