Tiger takes two-stroke lead into final round at Sherwood 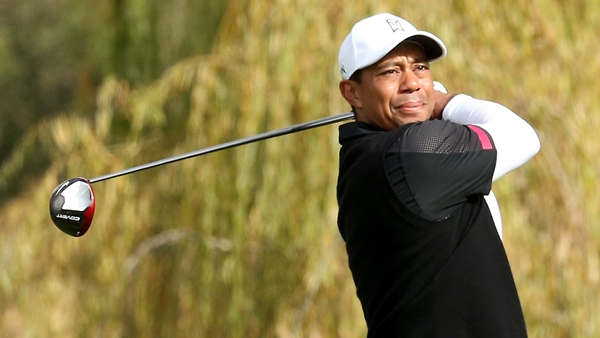 THOUSAND OAKS, Calif. –  After a day of so much uncertainty about where the ball was going, Tiger Woods landed in a place where the outcome is rarely in doubt.

He was in the lead.

Woods survived a rough round of swirling swing at Sherwood on Saturday with two birdies on his last three holes. That enabled him to salvage an even-par 72 and maintain his two-shot lead over Zach Johnson going into the final round of the World Challenge.

Woods’ round featured a tee shot into the water, a three-putt from 6 feet and a long delay on the 18th fairway as he tried to figure out which way the wind was blowing. He took a little off an 8-iron when he felt the wind switch yet again and holed a 12-foot birdie putt.

“I’m pleased at having the lead _ not real pleased with the way I putted today,” Woods said. “I left a few out there today.”

But he wasn’t alone.

The average score was just under 73, and everyone ran into problems somewhere along the way, particularly on the 15th, a par 3 that played to an average score of 4.17. Johnson made two double bogeys on par 3s on the back nine, and didn’t feel as though he hit a poor shot on either hole. It was simply a matter of getting the wind to co-operate.

“I didn’t take myself out of it,” said Johnson, who also birdied two of the last three holes for a 72.

Woods was at 11-under 205, two shots ahead of Johnson, just like he started the day.

There are 18 holes to go, and Woods has a 48-5 lead worldwide when he has the outright lead going into Sunday. He has won all four times with the lead this year, and the last time he gave up a lead on Sunday was at Sherwood in 2010, when Graeme McDowell came from four shots behind and won in a playoff.

It can be done, and two shots can be erased in one hole in conditions like this.

Woods is trying to end his year with a sixth title, which would be the ninth time he’s done that in his career. What began as an elite field of 18 players _ all of them from the top 30 in the world ranking _ has effectively been whittled to three barring a late charge from deep in the pack.

Bubba Watson was within one shot of the lead briefly until a three-putt bogey on the 18th, and two late birdies by Woods. Watson had a 69 and was four shots behind. No one else was within six shots of Woods.

“This golf course is very difficult,” Watson said. “Right now, there’s a pretty good player leading. He’s won here before. He knows this golf course pretty well. But I’m just going to come out there and play. I’ve shot under par my last few rounds. I want to keep doing that. If I can shoot in the 60s, give myself a chance, we’ll see what happens.”

Rory McIlroy had the low round Saturday of 68, and that included a double bogey on the par-3 15th, which was playing 193 yards from an elevated tee. Keegan Bradley and Steve Stricker each took a 7 on the par 3.

Johnson was one shot out of the lead when his 5-iron went into the creek, and it wasn’t particularly close. He made double bogey. Woods hit 6-iron well to the left, and while he three-putted from long range for bogey, that was about par for the day.

“I thought Zach hit it perfect,” Woods said. “He hit a little cut 5 and it was right on the flag. I mean, I thought it was the perfect flight to get there. I had a 6, and I knew that if my ball kicked up at all, it wasn’t going to get there after seeing his ball get smoked at the end. So I went ahead and flipped it over to the left and bailed out.”

Johnson briefly took the lead with a birdie on No. 9, though Woods caught him with a birdie on the 10th. Johnson lost momentum with one bad shot, a fairway metal for his second shot on the par-5 11th that went right into a bed of leaves under a small cluster of trees. He tried to punch under the trees and onto the green, but his shot hit one branch and led to bogey.

Johnson made a double bogey on the par-3 12th and just like that was three shots behind. He got back to within one shot on the next hole when Woods three-putted from 6 feet for bogey and Johnson made bogey.

Ultimately, they ended up where they started the day, putting Woods one round away from his sixth win at Sherwood. The tournament is moving to Florida next year.