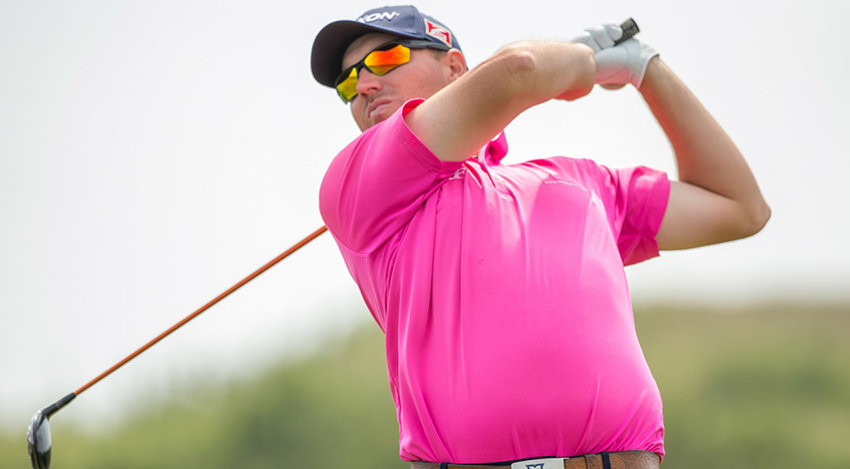 With a second consecutive 5-under-par 67, the long-hitting Pendrith is making a late push for a spot in The Five, the five players who will earn a card on next year’s Web.com Tour. He is currently 10th on the Order of Merit and trails the fifth spot by $10,146.

After his disastrous start on Thursday where he was 4-over-par after six holes, the Kent State product has played as well as anybody in the field over his last 30 holes, going 14-under-par during that span.

“I got off to a good start today and played the par-5s in 5-under which is handy,” said Pendrith, a resident of Richmond Hill, Ontario. “I made a couple of sloppy bogeys, but I hit my driver well and overall I’m pretty pleased with how I played. I made eight birdies today so I guess I am doing something right.”

Van Sickle posted the day’s low round, an 8-under 64 and credited some of his success on Friday to a missed opportunity at his opening hole.

“I got off to a bit of a rocky start on my first whole which was No. 10. I hit my second shot to 12 feet and then sent my eagle putt seven feet by,” Van Sickle recalled. “I then left my birdie putt hanging on the lip and had to settle for par. In retrospect it might have been a good thing because it got me seeing red and then I stuffed a couple of shots on the next couple of holes for birdies and then it was off to the races.”

Van Sickle went birdie-eagle on Nos. 6 & 7 to turn in 5-under-par 31 and had his lone bogey at No. 14 when he missed a five-footer. His 64 matched his low round of the year in the final round at the Bayview Place Island Savings Open presented by Times Colonist.

The weekend looms large for Tarter, who came into the week ranked 149th on the Order of Merit. However, consecutive rounds of 67 have handed him a golden opportunity.

“I knew coming into this week I needed a pretty high finish to advance to next week’s tournament,” said Tarter, who has made just two cuts in nine starts this year, “so I came into this week with the attitude that I had nothing to lose. I’ve made it a point this week to eliminate stress. It was something I wasn’t doing earlier this year and after a week off, it’s the best I’ve felt in a while and I’m excited for the weekend.”

12: The number of strokes under par by Taylor Pendrith on the par-5 holes so far thru two rounds.

14: Number of strokes under par for Taylor Pendrith in his last 30 holes after starting out 4-over-par thru 6 in Rd. 1.

11: The number of consecutive cuts made this year by 2013 Cape Breton Celtic Classic champion Mackenzie Hughes. That is the best current streak on the MacKenzie Tour.

59: The number of places that Krister Eriksson moved up the leaderboard after improving his score by six strokes from Thursday (73 to 67). He is now T42.

“Sometimes the best preparation for trying to reach the next level is to challenging yourself to the best of your ability. You can easily do that out here on this Tour. You can learn a lot from other players; see how they hit some of their shots, how they play as well as picking each other’s brains. You can learn a lot playing with other good players.” — Mike Van Sickle on competing on the Mackenzie Tour – PGA TOUR Canada.

“I learned over the course of the year that my strengths my last couple of years in college became a weakness for me out here early in the year. I was comfortable with my style of golf coming out here but I let myself get away from that. I was able to reflect on that recently and it’s been a good feeling.” — Nathan Tarter on his early struggles this year.