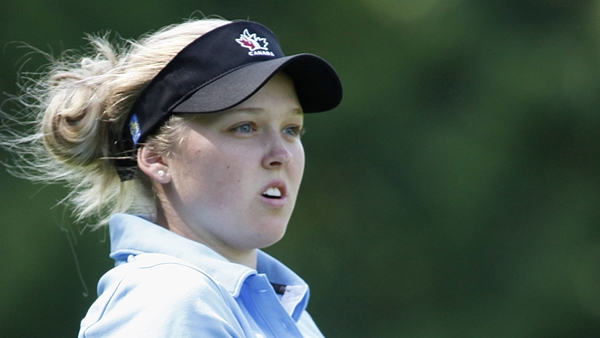 Henderson, playing at the qualifier in Manakin-Sabot, Va., totaled a score of 140 through two rounds en route to capturing medalist honours. This year’s U.S. Women’s Open will mark the third LPGA major tournament for the Smiths Falls, Ont. native – she played in the 2013 U.S. Women’s Open and this year’s Kraft Nabisco Championship.

Joining Henderson are Sue Kim of Langley, B.C. and Rebecca Lee-Bentham of Richmond Hill, Ont. Both Kim and Lee-Bentham were recently named to Team Canada’s Young Pro Squad. Kim, 23, carded a 142 and Lee-Bentham, 22, was three strokes behind with a 145.

Wallace, a Langley, B.C. native, became one of three who qualified at the Dunwoody, Ga., event. The 23-year-old finished with a 148 through two rounds.

Tong, a Thornhill, Ont., native, qualified with 148 at the Winnetka, Ill., event. The 21-year-old Indiana University student will join Henderson in the field as an amateur.

Also to note, Canada’s A. Ram Choi of Surrey, B.C., will be listed as an alternate player after carding a 151 at the Seattle, Wash., qualifier. Choi is a junior for the Portland State Vikings.

All five Canadians will head to North Carolina from June 17-22 to tee-it-up at the famous Pinehurst No. 2 golf course.

To cap off the week, Henderson got word on Tuesday that she earned a sponsor exemption to play in the Manulife Financial LPGA Classic for a second straight year. In 2013, the National Squad member fared well with a promising T35 finish.

With the announcement, Henderson becomes the seventh Canadian set to compete at the Grey Silo Golf Course in Waterloo, Ont., from June 4-8. She will be joined by veteran professionals Lorie Kane, Alena Sharp, and Maude-Aimee Leblanc. Also in attendance will be the three members of the Young Pro Squad – Rebecca Lee-Bentham, Sue Kim and Jennifer Kirby.