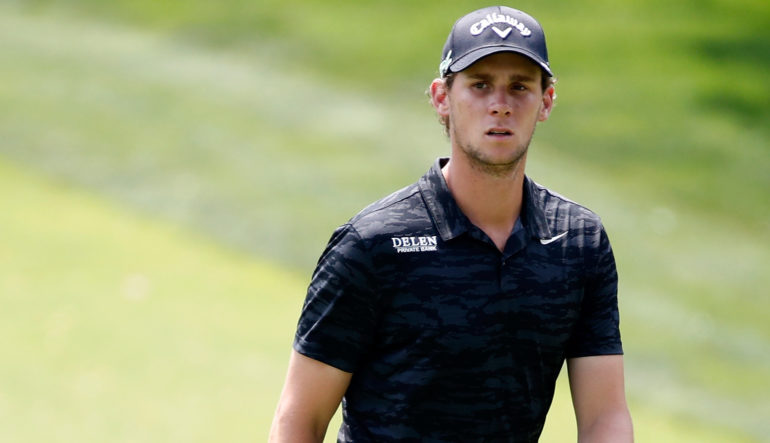 AKRON, Ohio – Rory McIlroy had his best friend on the bag and his best start on American soil in 18 months. For Jordan Spieth, it was more of the same with two long putts and another comment filled with bravado directed at his caddie.

Both of them opened with a 3-under 67 at the Bridgestone Invitational, leaving them two shots behind Thomas Pieters of Belgium.

Pieters, playing only for the sixth time since he challenged briefly at the Masters this year, holed a 30-foot birdie putt on his final hole at Firestone to finish a day of good scoring with a one-shot lead over Russell Knox.

Adam Hadwin of Abbotsford, B.C., is three shots back after a 68 while Mackenzie Hughes of Dundas, Ont., struggled to a 4 over following a 74.

The opening two rounds were moved up to the morning because of a forecast of thunderstorms in the afternoon.

McIlroy split with J.P. Fitzgerald, his caddie of nine years, after the British Open. He decided to use Harry Diamond, who played amateur golf for Ireland and was the best man at McIlroy’s wedding, for the Bridgestone Invitational and the PGA Championship next week.

It didn’t have much bearing on McIlroy’s game, which was fine. McIlroy won at Firestone the last time he played it in 2014.

“We both did the numbers and I sort of consulted him a couple of times. Yeah, it was good,” McIlroy said. “There was a couple of shots that I hit or a couple of clubs that I pulled that I maybe should have just thought a little bit more about. It’s been a while since I’ve paced yardages off and written notes in my book.”

One of them was at No. 9, his last hole, when he went some 50 feet long on his approach and three-putted for bogey. Even so, it was a solid start, and that’s what has held back McIlroy in recent months when he missed three cuts in four tournaments, and then started poorly at the British Open.

Spieth has no such concerns, having won two straight events going into this World Golf Championship with an eye toward next week at the PGA Championship and his shot at becoming the youngest player to complete the Grand Slam.

Winning a major turned this into a great year for Spieth, regardless of what happens at the PGA Championship. He is feeling as good as ever about his game, particularly the way he finished off Royal Birkdale with the amazing escape on the 13th hole and the birdie-eagle-birdie-birdie stretch that followed. The biggest putt was the eagle from 50 feet on the par-5 15th at the Open, now famous for Spieth playfully barking at his caddie, “Go get that!” when it dropped in.

Thursday brought another such moment.

Spieth got back into range of the lead with a 30-foot birdie putt on No. 5 and a 50-foot birdie putt on the next hole that got him to 3 under. But he was in trouble at No. 8, well right of the fairway with trees blocking his view of the green. He couldn’t punch under them because he had too much rough to cover with a punch shot beneath the branches. But he did see about a 3-foot gap way up in the trees. And he was feeling it.

His caddie, Michael Greller, got the yardage and came over to see what Spieth had in mind.

“I said, ‘Michael, just put the bag over there, stand over there and watch this,”’ Spieth said.

Spieth rehearsed his swing with a pitching wedge and pulled it off.

“I split a hole that was 60 yards in front of me and cut it to get onto the green,” Spieth said. “It was really a cool shot. I was shocked I pulled it off.”

Greller smiled, bumped fists with his boss and handed him the putter.

The opening round was no place to lose ground in such good scoring conditions. Dustin Johnson did his part with a 68. He hasn’t won since the Match Play just two weeks before his staircase injury that knocked him out of the Masters. Johnson only wants to give himself a chance to win, and he says all the parts are in working order for that.

Bubba Watson, also showing signs of getting his game turned around, was also in the group at 67 that included Kevin Kisner and Jon Rahm.

The surprise might have been Knox, who has missed his last three cuts and is in danger of falling out of the top 50 in the world for the first time since he won the HSBC Champions in Shanghai in the fall of 2015. The difference was a change in the shafts of his irons, and a change back to the putter he used when he won in Shanghai.

The question is why he would ever take that putter out of play.

“Golfers are sick,” Knox said. “You always blame your equipment rather than yourself. So maybe I just have to take the blame and say I (stunk) and the putter worked.”