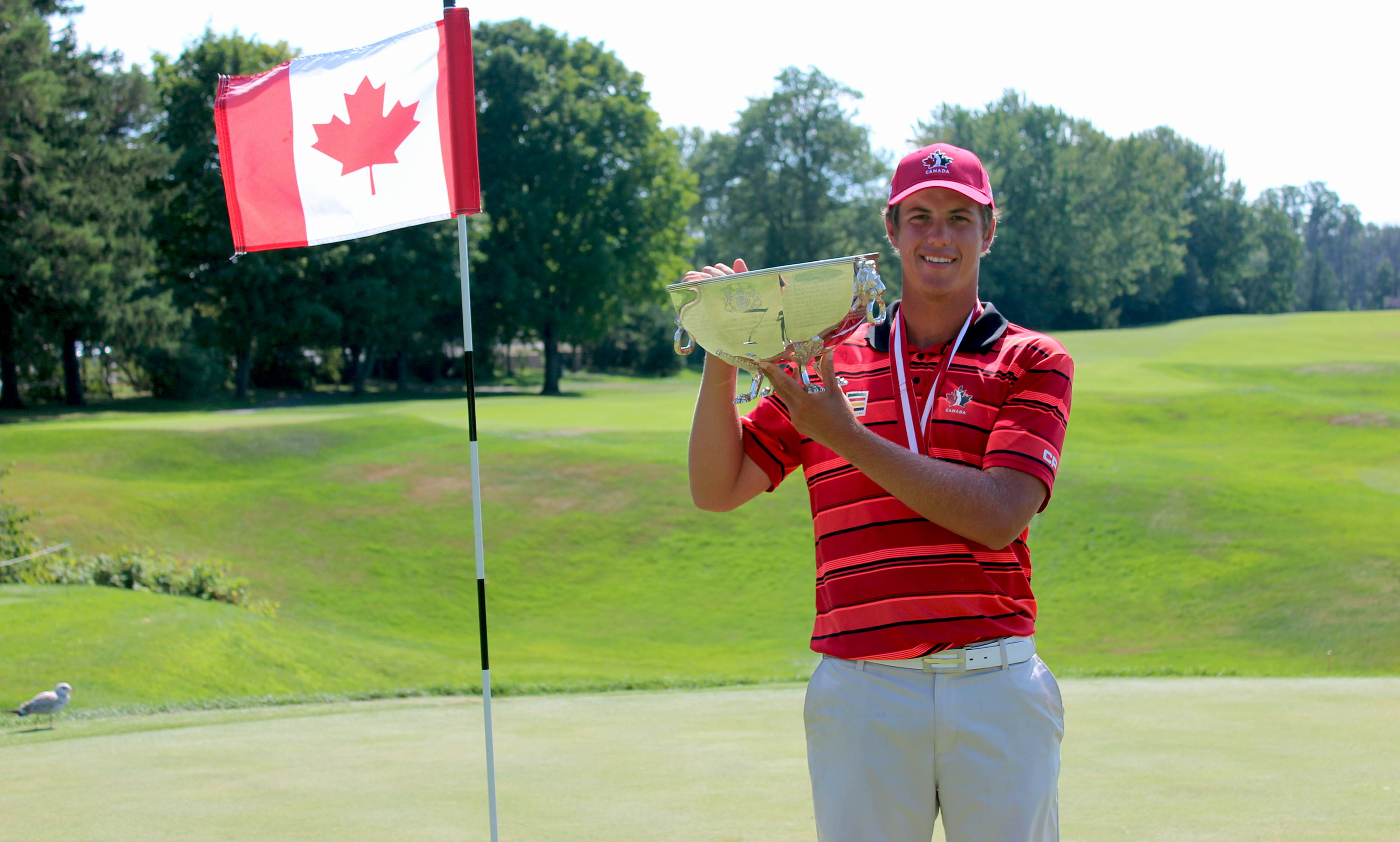 GATINEAU, Que. – The 112th playing of the Canadian Men’s Amateur Championship concluded under beaming sunshine and stifling heat. Hugo Bernard battled through the sweltering conditions to shoot 5-under 65 for a come-from-behind victory at The Royal Ottawa Golf Club.

Bernard – a member of Golf Canada’s National Amateur Team – began the day knotted in third, three shots behind leader Blair Bursey. Bernard carded a 65 – one short of the tournament’s low round that he posted on the second day – to secure the win.

“I played pretty solid,” said the 21-year-old. “My driver was pretty long and pretty straight, too. I made some great putts out there and it was a very solid round for me.”

He becomes the first Canadian to win the National Men’s Amateur title since Team Canada Young Pro Squad member Mackenzie Hughes won back-to-back championships in 2011-12. He is the first Quebec native to win the competition since Craig Matthew of Montréal accomplished the feat in 1998.

The victory adds to a season in which Bernard claimed medallist honours at the 2016 NCAA Division II Championship before capturing this year’s Alexander of Tunis and playing in the 2016 RBC Canadian Open at Glen Abbey Golf Club in Oakville, Ont.

The winner of the prestigious Earl Grey Trophy as Canadian Men’s Amateur champion was happy for the win, but seemed focused on the prized exemption into the 2017 RBC Canadian Open which accompanies it.

“It means a lot,” said Bernard of the title. “I’m so happy to get my spot for the [RBC] Canadian Open next year. I hope I’m going to do better than this year, so I’m pretty excited about it.”

The native of Mont-St-Hilaire, Que., tallied six birdies and held off the advances of several players, including Bursey. The product of Gander, N.L., held the lead for three consecutive days in a bid to become his province’s first Canadian Men’s Amateur champion.

“Blair Bursey from Newfoundland played amazing for the week,” said the winner, when asked about his competitors. “He shot 64 the first round; I was 10 shots back after one round, so it was my goal to chase him and I did it, so I’m pretty proud.”

China’s Andy Zhang, who resides in Winter Garden, Fla., shot 1-under on the day to maintain his hold on second. Bernard’s national teammate Stuart Macdonald began the day in sixth, but a 3-under showing vaulted the Vancouver native into third. Bernard reflected positively on his and Macdonald’s season as members of Golf Canada’s national team program.

Bursey would finish with a share of 5th at 6-under alongside Kristoffer Ventura of Norway. Despite the setback in the individual standings, Bursey led Team Newfoundland and Labrador to its first Willingdon Cup in the 89-year history of the team competition played concurrently over this championship’s two opening rounds. The historic win was also the Atlantic province’s first team title at any amateur level on either the men’s or women’s sides.

In addition to claiming an exemption into the 2017 RBC Canadian Open to be hosted at Glen Abbey Golf Club from July 24-30, Bernard has earned entry into the 2016 U.S. Amateur at Oakland Hills Country Club in Bloomfield Hills, Mich.

The 2017 edition of the Canadian Men’s Amateur Championship will be hosted at The Toronto Golf Club and Islington Golf Club in Toronto from August 7-10.

Additional information regarding the 2016 Canadian Men’s Amateur Championship can be found here.