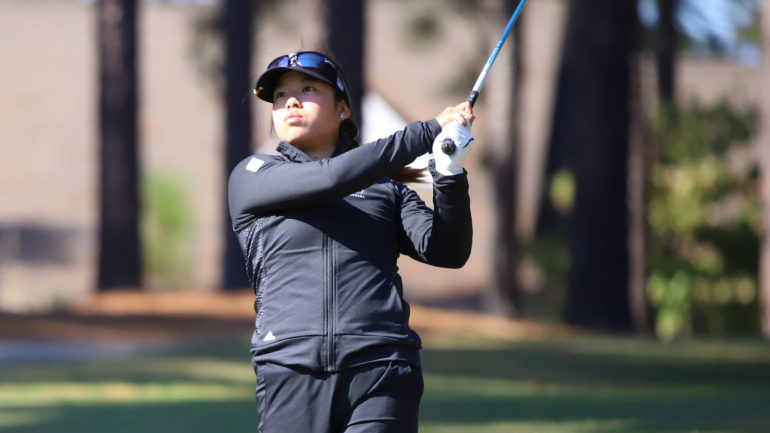 It’s a marathon, not a sprint. That was the message on a cool day at Pinehurst Resort for the first of eight rounds at the inaugural LPGA Q-Series presented by Blue Cross and Blue Shield of North Carolina. Canadian amateur Jaclyn Lee was the only player to go bogey-free on Wednesday at Pinehurst No. 6 with an opening-round 68. Lee is alone at the top of the 102-player field, and holds a two-shot lead over Pajaree Anannarukarn, Laetitia Beck, Jeongeun Lee6 and Klara Spilková.

The 21-year-old Calgary native, who made it to Q-Series all the way from Stage I of the LPGA Qualifying Tournament, lit up Pinehurst No. 6 on Wednesday with a bogey-free 68. There was a small group of supporters standing off the green to meet Lee, and she attributes her solid opening-round play to feeling comfortable at Pinehurst.

“I’m comfortable in this environment, I’m back with my host family from the North & South, which I love,” she said. “It’s good to be back and to have made it all the way here.”

Catching up with #TeamCanada amateur @JaclynLee57 who has the early lead at LPGA #QSeries after an opening-round 68 (-4) 🐲🇨🇦 pic.twitter.com/16ILABuEdi

“It feels pretty good,” the Ohio State senior said of her opening-round. “It’s nice to start the tournament with a solid round. I have the same goals for the next seven rounds, just to play some solid golf and try to get myself in a good position.”

New this year for the LPGA Q-Series, an amateur competitor earning LPGA status may defer her acceptance of LPGA membership until July 1 the following year allowing her to finish the college golf season if she wishes.

Canadian amateur @JaclynLee57 jumps to the early lead at #QSeries with a bogey-free 68 👏🏼👏🏼 pic.twitter.com/8TcMGLY6Sd

A lot is on the line these next two weeks as players will compete in a total of eight rounds over two, four-day tournaments with the top-45 finishers and ties receiving LPGA membership in Category 14 on the LPGA Priority List and remaining competitors earning Symetra Tour status.

Spilková, a winner on the Ladies European Tour, is aiming to finish the next two weeks inside the top 45 and was pleased with the way she fought in an opening-round 70.

“For me that’s the most important thing, to be able to let it go and just enjoy and that’s what I did today on the golf course,” Spilková said. “We had so much love, I just tried to hit fairways and greens and then two-putt. That’s how I want to play for all eight rounds. If I play even par, I’m pretty happy with it. If I make a few putts that’s pretty good. I’m not pushing myself too much.”

Quebec City’s Anne-Catherine Tanguay is 23rd after a 1-over 73. Meanwhile, Maude-Aimee Leblanc of Sherbrooke, Que., opened with a 6-over 78 to sit 84th.