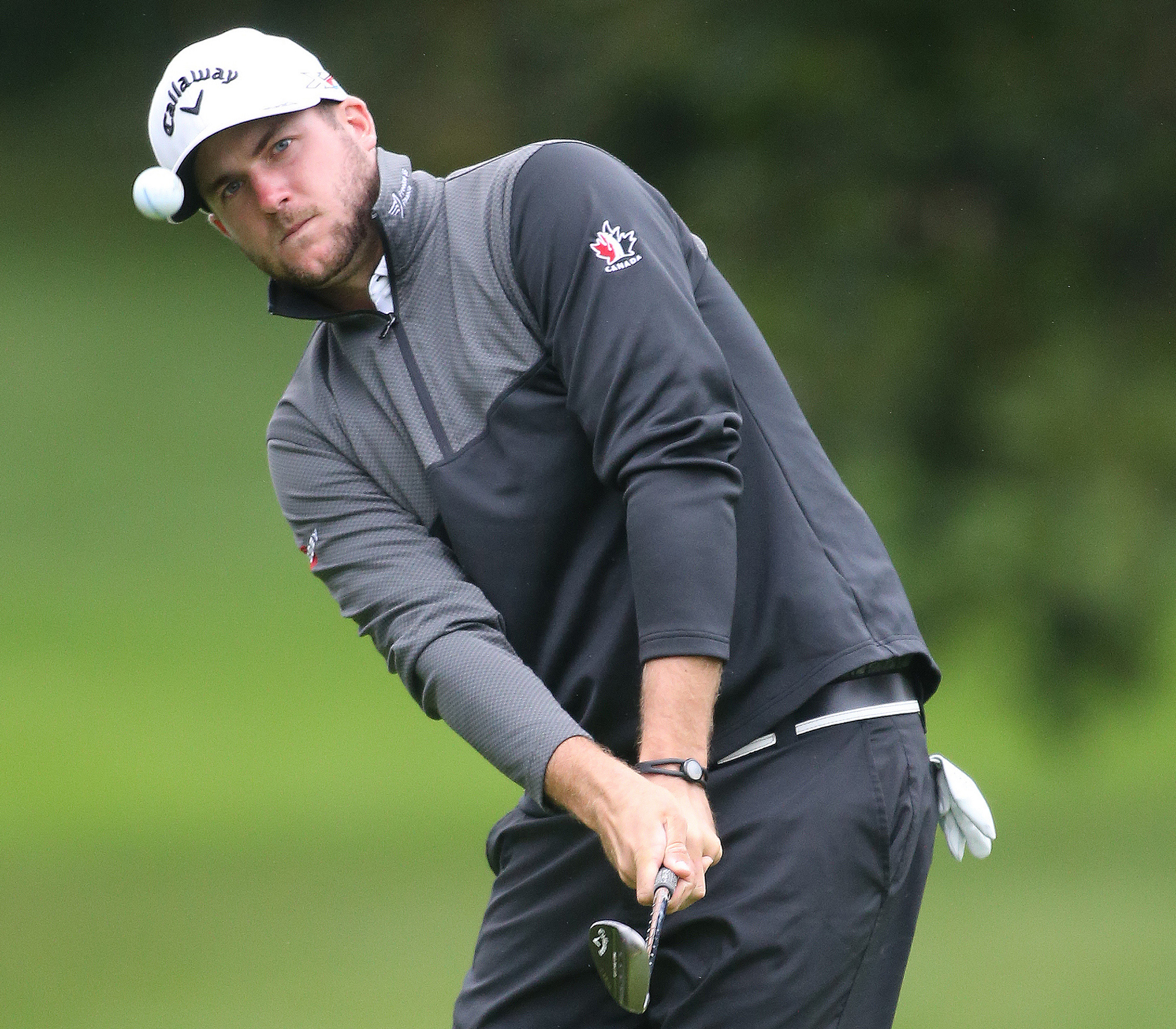 A fixture on the Order of Merit all season despite not having a victory to his credit, Taylor Pendrith posted the low round of the day with a 7-under 63 on Saturday at Highland Country Club to share the 54-hole lead with Jason Millard at the Freedom 55 Financial Championship, the season finale for the Mackenzie Tour – PGA TOUR Canada.

In addition to crowning the Freedom Financial 55 Championship winner Sunday at Highland Country Club, the tournament will finalize the Order of Merit with the top five players on the season-ending money list earning Web.com Tour status for 2016. The current Order of Merit leader, J.J. Spaun entered the day tied for second but fell off the pace with a 3-over-par 73 and sits T20.

Pendrith, of Richmond Hill, Ontario, entered the week No. 4 on the money list on the strength of three runner-up finishes, all playoff losses. He hopes to draw on the positives from those playoffs come Sunday.

“I’m looking forward to having the opportunity to win,” he said. “I’ve learned a whole lot about trying to finish it off all summer and hopefully I can get it done tomorrow. I haven’t come out on to yet but that will hopefully change tomorrow.”

As for his round of 63 in wet and blustery conditions that included winds up to 50 km/hour, Pendrith credited his putter getting him off to a hot start.

“I made a lot of putts and hit it pretty close all day. It was really difficult out there, but I was able to get off to a good start (4-under through four holes) which really helped given the conditions,” Pendrith said.

One day after posting a 7-under-par 63 to take the 36-hole lead, Millard managed just one birdie over his first nine holes. That changed on the back nine, as he birdied No. 10 and followed that up with an ace on No. 11 with a 5-iron from 192 yards. He finished with a round of 67 and a share of the lead.

“With the wind and the rain and the conditions, it was tough, I hadn’t played in anything like that in a while,” Millard said. “I made some good par saves on the front that gave me some momentum. I haven’t been in this position in a while, and I felt pretty calm all day. I know there will be some nerves tomorrow, but I feel good heading into tomorrow.”

As for the hole-in-one, it was an unexpected but welcome surprise.

“I was trying to hit it low, and I really wasn’t aiming at the flag,” Millard said. “To be honest, I pushed it a little bit. But it felt great.”

If Millard wins this week and earns the $36,000 winner’s prize, he would reach he would hit $57,040 in earnings for the season and would have an outside shot at the top five.

Ryan Williams, of Vancouver, British Columbia, sits third at 12-under after his second consecutive round of 65. He won last year’s Freedom 55 Financial Championship up the road at Sunningdale Golf & Country Club, coming from two strokes back in the final round.

Max Gilbert of Saint-Georges, Quebec, is making another late-season charge, as the 2013 Freedom 55 Financial Championship winner sits three shots back in fourth place. Gilbert finished T10 last week at the Cape Breton Classic to move into the top 60 and qualify for the Freedom 55 Financial Championship. With a win by either Gilbert or Williams, the victor would fall shy of the top five on the Order of Merit but would secure entry into the finals of Web.com Tour Qualifying School.

1: Shots needed on the first hole of the day for Brad Clapp, who aced the first hole in Saturday’s third round from 167 yards. Clapp also eagled No. 4 en route to a 6-under-par 64. The hole-in-one was Clapp’s second of the 2015 season, having aced No. 16 in the final round at The Players Cup.

2: Two of the top five in the Order of Merit enter the final round inside the top 10: Taylor Pendrith (T1) and Albin Choi (T8).

“You don’t get the first hole as a par-3 very often, but you celebrate like any other hole-in-one. Luckily there were some people around that witnessed it, otherwise I think people would think I was lying.” — Brad Clapp on his hole-in-one on No. 1 Saturday.

“When I holed out that second one, the bunker shot on 4, I looked at [fellow competitor John Ellis] and said, ‘this is kind of a weird day.’ It makes you feel like you can make anything.” — Clapp after holing out for eagle on No. 4 Saturday

“My putting’s been exceptional this week. Any time I can see one go in early, that kind of gives me the confidence that it should be a pretty good day. I had another great day on the greens, and it definitely helps when you make one early.” — Ryan Williams on his putting this week