Taiwan sweeps US on day 1 of International Crown 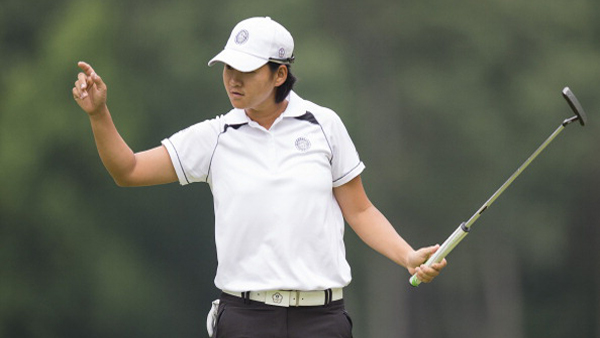 OWINGS MILLS, Md.– Yani Tseng made a 12-foot birdie putt on the 18th hole to give Taiwan a sweep of the top-seeded United States team Thursday in the opening round of the International Crown.

Tseng and Phoebe Yao never trailed in a 1-up win over Stacy Lewis and Lexi Thompson. Earlier, Candie Kung and Teresa Lu beat Paula Creamer and Cristie Kerr 4 and 3.

Each team receives two points for a win and one for a tie. The U.S. was the only team that failed to secure a point on the first day.

Japan took the lead in Pool B with a strong performance against Sweden. Although the Japanese team of Ai Miyazato and Sakura Yokomine led from start to finish, it took a birdie on No. 18 by Yokomine to secure a 2-up win over Pernilla Lindberg and Mikaela Parmlid.

“That was a great start, for sure,” Miyazato said. “But still a long way to go. I’m exhausted already, because I used so much energy on the golf course.”

In Japan’s other match, Mamilo Higa and Mika Miyazato halved with Caroline Hedwall and Anna Nordqvist, who trailed by two strokes with seven holes left.

“We played really well, both of us, and just gave ourselves a lot of chances,” Hedwall said. “Then they managed to hole a couple more putts than we did. But I think we fought back really nice, and it’s good to get one point at least.”

The first points of the tournament were secured by Spain against Thailand in Pool A. The duo of Carlotta Ciganda and Azahara Munoz won 3 and 2 over Pornanong Phatlum and Onnarin Sattayabanphot, and Spain’s Belen Mozo and Beatriz Recari halved with sisters Ariya and Moriya Jutanugarn.

That provided the elated Spaniards with three points.

“From the beginning we started playing really well and kept hitting fairways and greens,” Munoz said. “We had many chances. We’re extremely happy to get those two points.”

Ciganda and Munoz were no strangers on the golf course.

“I played with Azahara lots of years when we were amateurs, then we went to school together and we played last year at the Solheim Cup,” Ciganda said. “Playing today with her, we were so comfortable out there, just having fun, laughing and making birdies.”

South Korea split with Australia, leaving each country with two points in Pool B. After Inbee Park and So Yeon Ryu forged a 3-and-2 win over Katherine Kirk and Lindsey Wright of Australia, Karie Webb and Minjee Lee beat I.K. Kim and Na Yeon Choi 2 up.

Park and Ryu both eagled the par-5 12th hole for a three-hole lead and coasted to finish.

The Webb-Lee tandem didn’t lead by more than one stroke until Lee sank her fourth birdie putt on the 18th hole.