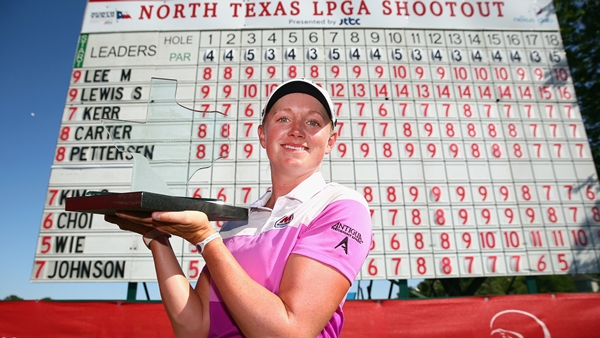 IRVING, Texas – There was no near-miss for Stacy Lewis this time.

This was a runaway for the highest-ranked American after six runner-up finishes in her previous 16 tournaments.

Lewis shot a 7-under 64 on Sunday in the North Texas LPGA Shootout, finishing at 16-under 268 and six strokes ahead of Meena Lee. It was the LPGA Tour’s largest margin of victory since Jiyai Shin won the 2012 Women’s British Open by nine.

“I’ve been wanting to do this for a long time. I kind of have these mini goals in the back of my mind,” Lewis said. “One of them was kind of taking a tournament and running away with it. … So to be so close the last few weeks and then to come out and shoot 64, I mean I don’t even know what to say.”

It was the ninth career LPGA Tour victory for Lewis, her first since August in the Women’s British Open, and will boost the Texan from third to second in the world ranking.

Lewis made a putt from about 25 feet off the fringe at the 540-yard seventh for an eagle. She followed with consecutive birdies to make the turn at 14 under and up by three strokes.

“The eagle just really kind of got things going in the right direction, and then just I never let up,” said Lewis, who punctuated her round with birdies on Nos. 17 and 18. “I never let the hammer down.”

Lee, the South Korean who won the last her two LPGA Tour titles in 2006, shot 70 after going into the final round at Las Colinas Country Club tied with Lewis for the lead. Lee bogeyed the opening hole and needed a birdie at No. 18 to finish alone in second place.

Michelle Wie, who closed within two before faltering late, had a 67 to finish third at 9 under.

Lewis, from The Woodlands near Houston, has finished outside the top six only once in nine tournaments this year. She was third at the Kraft Nabisco and had another runner-up finish just last week in San Francisco. She had three runner-up finishes in her last eight tournaments in 2013 after her victory at St. Andrews.

Lewis got a share of the lead in Texas after a frustrating 69 in the third round Saturday when she hit all 18 greens in regulation but missed several makeable birdie putts.

“Honestly, I didn’t change anything. I didn’t do anything different,” she said. “They just didn’t go in (Saturday). … But once you see putts in, it’s kind of contagious.”

Defending champion Inbee Park closed with a 72 to tie for 14th at finish at 5 under. That will be good enough when the new world ranking comes out to stay No. 1 for the 56th consecutive week since the South Korean replaced Lewis at the top.

Lewis will supplant Lydia Ko in the second spot. Ko, who didn’t play in North Texas, moved to No. 2 after her win last week in San Francisco only days after her 17th birthday.

Canada’s Alena Sharp was one of four players who tied Park for 14th spot. Sharp, who started the final round in a tie for 18th, climbed four spots up the leaderboard Sunday thanks to a 1-under 70. She finished at 5-under 279.