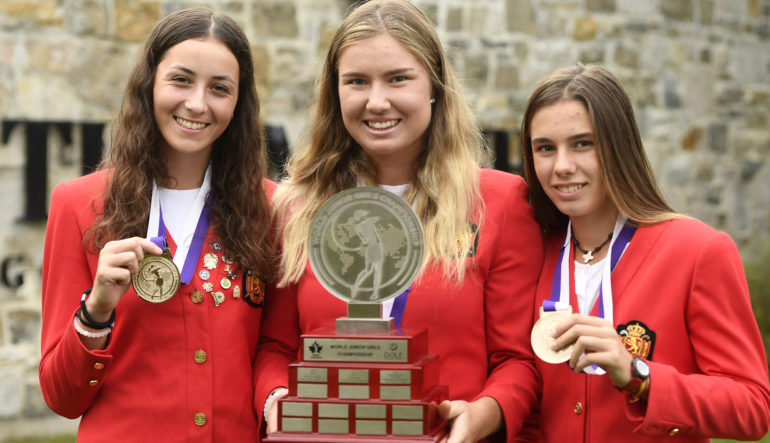 Few could have predicted the wild finish that took place on Friday for the World Junior Girls Championship at The Marshes Golf Club.

In thrilling fashion, the Spanish team fired a collective 4-under par (140) to erase an eight-stroke deficit, forcing a playoff with the Korean squad. As light rain began to fall, both teams headed back to the par-4 18th in pairs to conduct the first playoff in World Junior Girls Championship history.

The Spaniards kept their foot on the gas, with two of the first three team members making birdie on the hole to put the trio at 2 under. The Korean team was then forced to hole out for eagle to continue the match, but their approach missed the green to the right.

“If I would not have made that putt, my teammates might not have been as motivated as they were,” said Elena Arias, the first Spanish team member to birdie the playoff. “I just hit the putt like the other times I had played the hole. It just looked so clear to me and went in but I was so nervous.”

Dimana Viudes followed in the second playoff group, capping her 3-under bogey-free round with a birdie of her own.

“It is like Elena said, her putt really gave me confidence because knowing that we already had a birdie was a great start,” said Viudes, who finished in fourth place individually. “I was very nervous but at the same time calm as well. I was just lucky enough to pull off the shot.”

The win marks the first World Junior Girls Championship medal for Team Spain, which is something not lost on the team’s coach.

“This is a dream come true. To beat a strong team like Korea is something else,” said Nacho Gervas, Team Spain coach. “They are so strong that at times you feel like you are playing for second place. I told them (Spain) they had the game to do well today and if we played our game you never know what can happen.”

Republic of Korea’s Seo-yun Kwon, the 54-hole leader, headed into the final round with a two-stroke advantage over Italy’s Alessia Nobilio. Kwon had built a clear advantage on the day before running into trouble on the par-5 14th with a triple-bogey.

Nobilio took advantage of Kwon’s mishap by making birdie on the 14th to briefly hold a one-stroke lead, until giving a stroke back on the next hole. The pair took scores of 9 under to the last hole, forcing another playoff to be commenced after the team event was decided.

With Korea losing the team event, Kwon was determined to come out on top. The 16-year-old missed the green on her approach but went up-and-down for par, beating out Nobilio who slipped with a bogey.

“At first I was angry with myself because I was leading by a few strokes and made one mistake,” said Kwon. “Even though I won the individual medal, I am a little disappointed in myself because if I had done a little more, we could have won the team championship so it is bitter sweet. This is my first win at an international tournament so right now I am so happy.”

A big round of ?? for Korea’s Seo-yun Kwon??, who hung on for the wire-to-wire individual title at the World Junior Girls Championship #WJGC pic.twitter.com/vOXAzuHWvB

Rounding out the team medallists was the trio from Sweden, who finished the tournament at 9 under par, five strokes shy of Spain and Korea. Spain’s Blanca Fernández took home the individual bronze medal, posting a final-round 71 to close the tournament at 7 under par.

Céleste Dao from Notre-Dame-de-L’Île-Perrot, Que., finished as the low Canadian with a share of 24th place at 6 over for the tournament.

In 2018, the World Junior Girls Championship will return to the Ottawa area at Camelot Golf and Country Club next September.

Additional information and full results from the competition can be found here.

Photos from the fourth annual World Junior Girls Championsip can be viewed here.