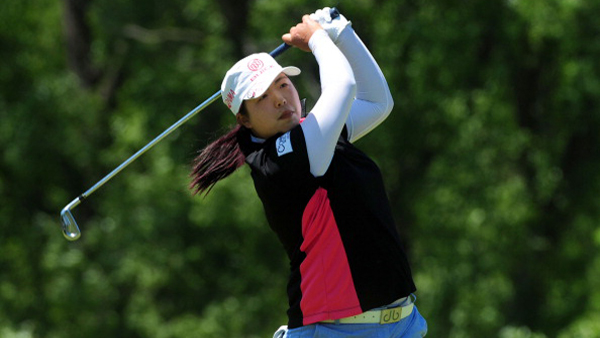 The 24-year-old Chinese player had a 15-under 198 total. She made a 30-foot eagle putt on the par-5 fifth, had two birdies and dropped her first stroke of the week with a bogey on the par-4 16th.

“I got off to a very good start, 4 under through six holes,” Feng said. “Then actually, I couldn’t make a lot of putts. I missed a lot of birdie putts, plus one bogey, so actually I dropped back one shot. My goal is to get to 25 under. Of course, now I’m 15, so if I want to get to 25 tomorrow, I need to shoot 10 under.”

“I think tomorrow I have no pressure,” Feng said.

Michelle Wie and second-ranked Inbee Park were tied for second. Wie had a 65, and Park shot a bogey-free 65.

Wie, the winner in Hawaii in April, is seeking her second victory in Canada after winning the 2010 Canadian Women’s Open in Winnipeg, Manitoba.

“Yeah, quite a shaky start,” Wie said. “I missed a good birdie opportunity on the first hole and I kind of duck hooked it on the second hole and had to take an unplayable, and actually it was a really good bogey.

“Then I kind of hooked it on the next hole, hit it in the bunker. So I just couldn’t get my tempo right in the beginning, but definitely felt like I finished strong. Definitely the start that I had today, I’m really happy with the way I finished.”

Park is winless in 10 tour starts this season after sweeping the first three majors last year and finishing the season with six victories.

“I played really well on the front nine,” Park said. “I holed a lot of putts. I feel like I hit the ball great today. I had a lot of opportunities on the back nine also, but just missed a couple putts. I think overall it was a very good day. Just give myself a chance for tomorrow.”

“Mentally, I was very good today,” Kerr said. “I’ve just got to take that into tomorrow.”

Third-ranked Lydia Ko and Anna Nordqvist were 11 under. The 17-year-old Ko had a 64, the best round of the day, and Nordqvist shot 69.

“You never know what’s going to happen,” Ko said. “There’s always another 18 holes. … I’ve just got to play my own game and see where it goes.”

Defending champion Hee Young Park, tied for the second-round lead with Feng, had a 72 to drop into a tie for seventh at 10 under.

Top-ranked Stacy Lewis was 7 under after a 69. She won last week in New Jersey to take the top spot in the world from Inbee Park.

Alena Sharp shot 65 to sit tied for 23rd, while Sue Kim of Langley, BC is among the group currently tied for 33rd after shooting 67 in round 2. LPGA Tour rookie Jennifer Kirby of Paris, Ont. and 16 year old amateur Brooke Henderson of Smiths, Falls, Ont. both carded 69 to close the day tied for 50th.