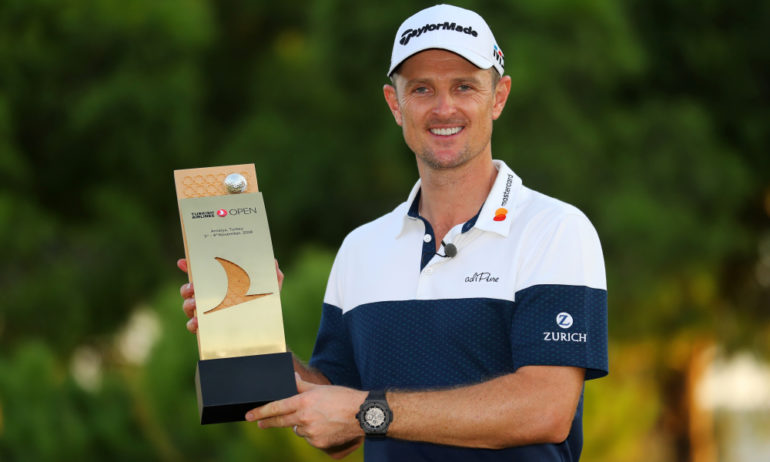 ANTALYA, Turkey —Justin Rose is No. 1 in the world again, and this time it feels even more special.

More than having the top ranking, he goes home with a trophy.

Rose rallied from a three-shot deficit Sunday with a 3-under 68, and then defeated Li Haotong of China on the first playoff hole with a par to win the Turkish Airlines Open for the second straight year.

The first time Rose reached No. 1 in the world was two months ago, a bittersweet moment because he lost the BMW Championship outside Philadelphia in a playoff against Keegan Bradley.

“This time I’ve got some silverware,” Rose said. “Last time it was muted because I was still so mad at not winning the tournament at the BMW. But this time I’ve got the double kind of winning feeling, so it might be a bit more fun to celebrate it at this time.”

The 38-year-old from England has plenty to celebrate of late.

He won the FedEx Cup on the PGA Tour with its $10 million bonus, but much like getting to No. 1 in the world for the first time, it was an awkward moment because he had a chance to win the Tour Championship and instead closed with a 73 and tied for fourth.

Those were big achievements that felt at the moment like consolation prizes.

“Not having that winning feeling in a tournament but still coming away with accolades,” Rose said. “I was keenly aware that I wanted to get back in the winner’s circle, and it was good to get it done today.”

He needed help from Li, who closed with a 71 and lost the playoff with a three-putt bogey from just inside 10 feet.

“It’s a tough day for me,” Li said. “I think I played well the whole week, but didn’t hole a few putts on the last and that was it.”

Rose made his fourth birdie of the round at the 14th for a two-shot lead. Li responded with a stunning approach to tap-in range on the par-5 15th for an eagle and a share of the lead when Rose three-putted from long range for par.

Rose made a 4-foot birdie on the 16th to regain the lead, only to give it back with a three-putt bogey on the 17th. Li three-putted from long range on the 18th for bogey and Rose was set to win in regulation when he blasted out of a bunker to 4 feet, only to miss the short par putt.

Rose missed a 15-foot birdie putt on the 18th in a playoff. Li missed his birdie putt for the win, and then missed the par putt to lose.

It was the 21st victory worldwide for Rose, and the first time he had successfully defended his title. While the Turkish Airlines Open was only his second title this year, he has been at a consistently high level over the last two months.

Rose said it was the best golf of his career “as a collective body of work.”

“Just the consistency of it,” he said. “I think I averaged 68.9 on the PGA Tour this year, and that’s way lower than I’ve ever averaged before. The fun thing is I still feel like there’s improvement to be had and that’s what I’m looking for. I’m really looking forward to the off-season to still work at a few things and still get better. I think that’s the exciting part _ at 38, I still feel like there is improvement to be achieved.”

Rose was headed home to the Bahamas instead of playing the next Rolex Series event in South Africa, and he was not planning to be at the Race to Dubai finale at the DP World Championship. He would have to win to overtake British Open champion Francesco Molinari.

Rose kept the No. 1 ranking for two weeks the first time he reached the top. Brooks Koepka will have a chance to take it back in two weeks when he defends his title at the Dunlop Phoenix Open on the Japan Golf Tour.