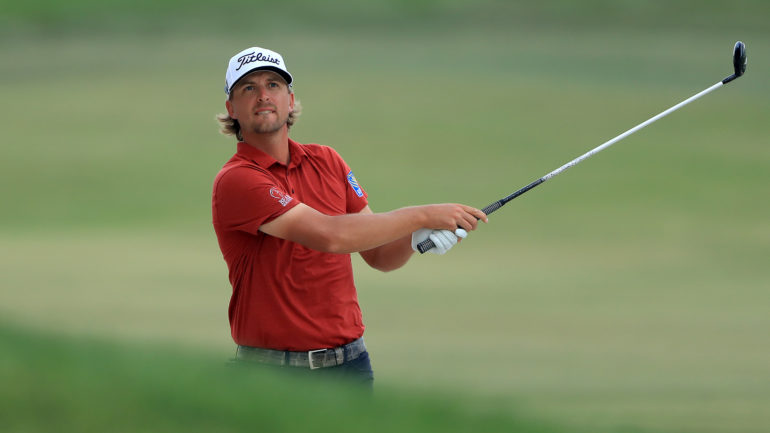 FORT WORTH, Texas – If Jordan Spieth is going to end a victory drought that’s approaching two years, the three-time major winner picked a good place to give himself a chance.

Spieth opened with a 5-under 65 at Colonial on Thursday in his second Texas homecoming in three weeks – coming off his best finish of the season at the PGA Championship – and trailed Tony Finau by one shot. Roger Sloan of Merritt, B.C., joined Spieth in the tie for second.

Back when he was collecting trophies regularly three years ago, Spieth won on the cozy course made famous by Ben Hogan, and that was between a pair of second-place finishes in Fort Worth. So when it comes to feeling good about his game, Spieth’s in the right place, just a few miles from his hometown of Dallas.

But the former Texas Longhorn didn’t necessarily have to be here, a week after tying for third at the PGA for his first top 20 this season.

“I didn’t put it above or below any other week,” said Spieth, whose last victory was the 2017 British Open. “I know my game has been progressing. I’ve been saying that for the last month or six weeks or so. Results just end up coming when I actually start playing better golf. Simply put, that’s just what I’ve been doing.”

Defending champion Justin Rose, the highest-ranked player in the field at No. 3, shot 74 with four bogeys on the back nine.

Sloan, who hadn’t been to Colonial before this week, had a steady round with three birdies on each side. He said his swing coach thought the cozy layout would fit the 32-year-old’s game. He hasn’t played on Sunday in five straight tournaments, missing the initial cut in the first four.

“That’s the tendency every year for me, get off to a good start, go into a little bit of a lull,” said Sloan, whose only victory was on the Canadian tour in 2011. “So I’m pleased that I was able to turn things around heading into the last little kick of the regular season.”

J.J. Henry, who played in college for Colonial neighbour TCU, and two-time Colonial runner-up Jason Dufner were among nine at 67. Ryan Palmer had the only bogey-free round on his home course, finishing at 68 with seven others, including Mackenzie Hughes of Dundas, Ont.

Spieth kick-started his round by chipping in for birdie on the par-3 13th, his fourth hole of the round. He ended up with seven birdies in a span of 10 holes, the other highlight a 46-foot putt on No. 4.

A double bogey at 18, with a second shot into the water left of the green, finished Spieth’s front nine and was the only thing between him and the lead as he tries to keep climbing in the world rankings. Spieth jumped nine spots to 30th after the PGA.

“I think the course fits me well,” said Spieth, who tied for 29th in his hometown tournament, the Byron Nelson, two weeks ago. “It seems to have fit me well whether I’ve had form coming in or not. I know which spots to play to. I don’t try and do too much.”

Finau, who hasn’t finished higher than 60th in three tournaments since tying for fifth at the Masters, had five birdies over seven holes before closing with five straight pars. His best Colonial finish was a tie for 19th in his debut four years ago.

After changing his putting grip following a closing 79 at the PGA, Finau had four birdie putts from 19 feet or longer while hitting just three of 14 fairways. He avoided a second bogey with a chip-in on the par-3 16th.

“I didn’t know I only hit three fairways,” said Finau, the last of the nine top 20 players in the field at No. 16. “I still felt like I could hit most of the greens from wherever position I was.”

Kevin Kisner, playing with Spieth two years after edging him by a stroke to win Colonial, shot 72.

Of the 12 players atop the leaderboard, 11 played in the morning. Conditions toughened later with temperatures reaching 90 in steady 20 mph winds.