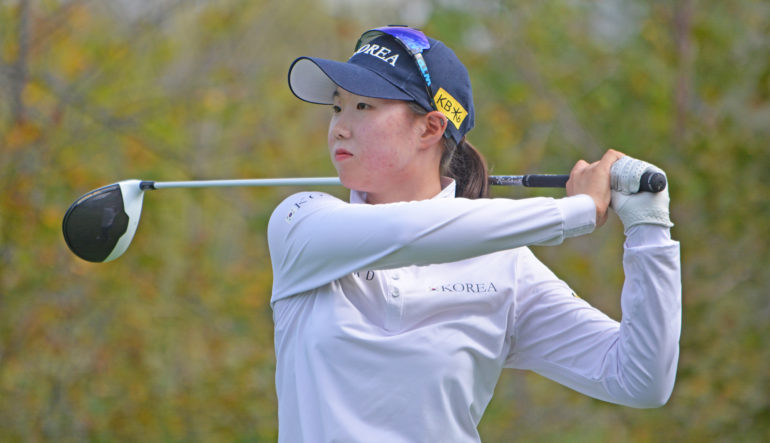 The Republic of Korea were not fazed by the sweltering heat on Monday at The Marshes Golf Club, carding a score of 10 under to take the 18-hole lead at the fourth annual World Junior Girls Championship.

In temperatures upwards of 30 C, the Korean team recorded a score of 134 to build a one-stroke advantage over the American squad. The trio were paced by Seo-yun Kwon, who fired a 7-under-par 65 for a two-stroke cushion in the individual competition.

“For the first three or four holes I missed a couple birdie putts and that made me hot because I was angry,” said Kwon. “The turning point was a birdie on the sixth and at that point I didn’t even realize how warm it was.”

The 16-year-old thrived in the heat, recording five birdies and an eagle on the par-5 14th.

“Right before you make a shot you imagine how it will go in your mind. During the practice round I tried to get on in three because it is a long hole,” said Kwon. “Today, my driver was so good that when I got to my ball, I realized I should try to reach with my three wood. My putter was also great today so the 14th went exactly how I imagined it would.”

The second-counting score for the Republic of Korea was registered by Yunji Jeong, who posted a 3-under-par 69 to sit tied for sixth. The Republic of Korea are no strangers to success at The Marshes Golf Club — they ran away with the competition when it was held at this same course in 2015, winning by a margin of 18 strokes.

“The course looks very friendly to Korean players, even though the shape and grass type are different,” added Kwon. “However, the shot has to be accurate because the fairways are narrow, including the landing zones, and there is bush on either side and those conditions are very similar to in Korea.”

Holding second place is America’s Gina Kim, who went 5 under on the back nine, including an eagle of her own on the 14th — one of two on the day. Third place is currently occupied by a trio of competitors at 4 under par: Hana Ryskova (Czech Republic), Alessia Nobilio (Italy) and Erica Shepherd (USA).

Emily Zhu, Canada’s youngest competitor from Richmond Hill, Ont., led both Canadian squads with an even-par 72 to sit T23 overall. The 13-year-old’s round was a positive note in what was otherwise a difficult opener for the host nation.

“I don’t think that it was the start that we wanted but the girls all played better than what they scored. I trust in the fact that they are hitting the ball well and that they are going to get better every day, that is our goal,” said Ann Carroll, coach of Canada One. “It is a 72-hole tournament and we will just focus on getting better every day. We’ll make today the high round and focus on trying to improve on the little things that make a big difference.”

With a total of 3-over 147, Canada Two comprised of Zhu, Euna Han (Coquitlam, B.C.) and Alyssa DiMarcantonio (Maple, Ont.) are tied for 15th place.

The second round will begin at 8 a.m. with no cut for the tournament. Additional information from the competition can be found here.