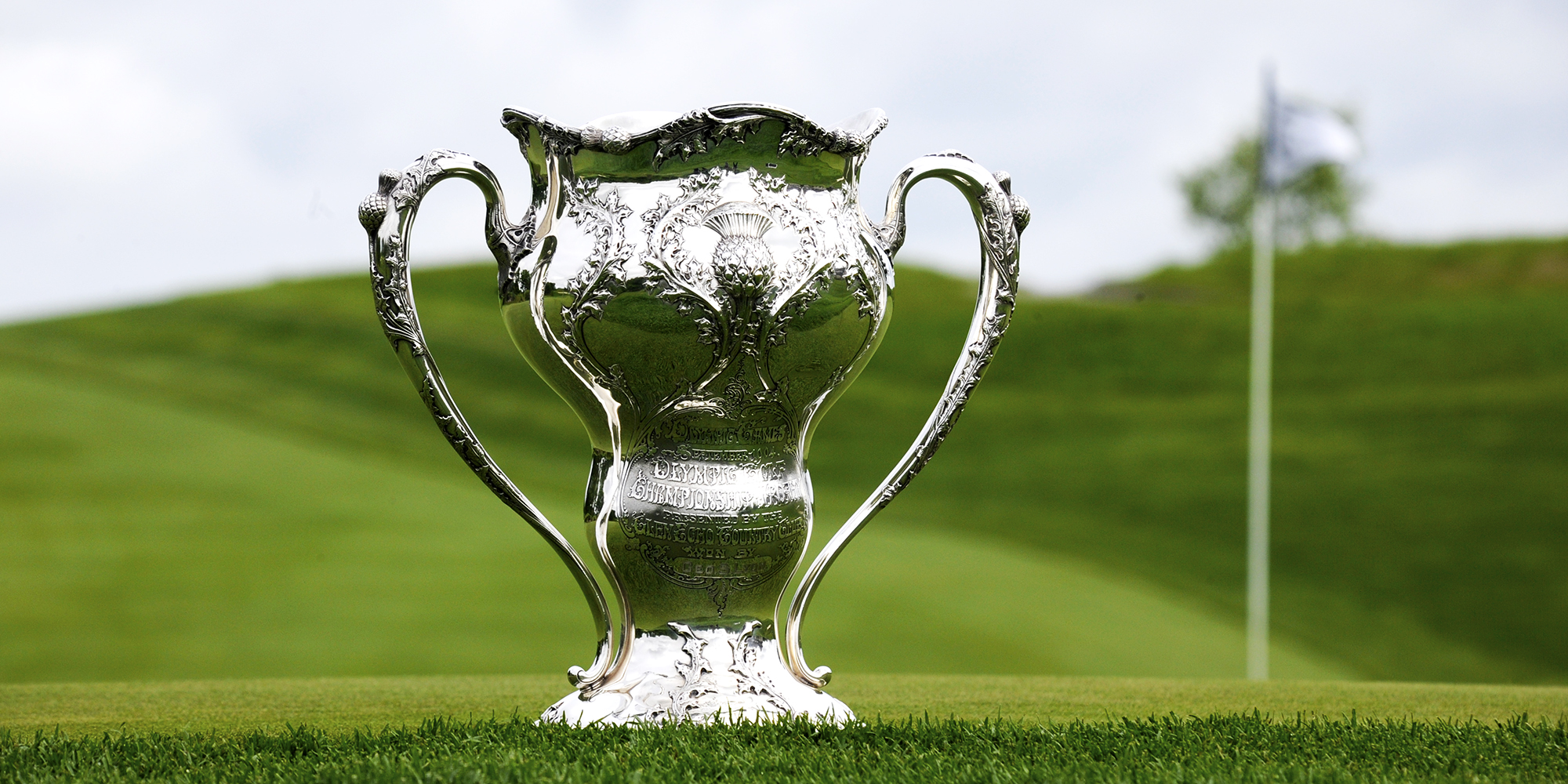 That’s a specialty of mine. You’ve come to the right place.

The Claret Jug? He’s the elder statesman of our group. The R&A has been giving him out to the winner of the (British) Open Championship since 1873. Talk about shelf life. All of us have tons of respect for ‘Jug.’

Every golfer wants a Green Jacket, but the Masters trophy? That guy is majestic. Someone told me it took 900 pieces of sterling silver to build the rendition of the Augusta National Clubhouse on his base. Prettiest trophy in the game in my opinion.

Fire has been real tough on the boys in Far Hills, N.J. The original U.S. Open Trophy and Havemeyer Trophy, the one they give to the United States Amateur Champion, those went up in flames in two separate fires years ago. Tragic? You bet. But the boys the USGA replaced them with look great don’t they?

Since we’re reminiscing, I recall this one time in 1963. There was no fire, but the Wannamaker Trophy? He got so hot sitting in the blazing sun at the Dallas Athletic Club, that Jack Nicklaus, the PGA Champion that year, had to wrap a towel around the guy just to hold him. Lots of funny trophy stories like that one.

Me? Well, I’ve been a fixture here at the Canadian Golf Hall of Fame and Museum for a long time. Can’t say I’m as famous as any of those other trophies. Matter of fact, a lot of people don’t even know I exist. That’s okay. Last time they played golf in the Olympics was 1904. Tough to be relevant when you’ve been away more than a century right? That’s a long time out of the spotlight. But guess what? With golf returning to the Games in Rio next summer, I’ve been enjoying quite the resurgence. Seems lots of people suddenly are interested in me again. It’s been the same for the fella who won me, George S. Lyon. Talented player. Beat Chandler Egan to win me and the Olympic gold medal in pouring rain at Glen Echo Country Club in St. Louis that year. George has been gone since 1938, but with the International Olympic Committee reinstating golf to the Games, he’s been a hot commodity. Lots of people want to know about him and his career.

Like who? Well, Golf Channel for one. They flew up to see me here in Oakville a few weeks ago. Took all kinds of footage, did a photo shoot, talked to the Hall Curator Meggan Gardner about George and me. It was an exhausting day.

Since then, I’ve been on tour. Golf Canada had me on display at Glen Abbey during the RBC Canadian Open. That was fun. Even had my picture taken with Graeme McDowell and Nick Taylor.

The very next week Alyssa Reynolds, the museum’s assistant, drove me to Akron, Ohio for the WGC Bridgestone Invitational. Nice folks at Bridgestone. Paid all our expenses for five days. In return I did a bunch of personal appearances for them. They even put me in the room during a ‘One Year before Golf Return’s to the Olympics’ news conference with Matt Kuchar, Byeong-Hun An and Henrik Stenson. Those guys are funny. Took a bunch of ‘selfies’ for social media. Cool stuff, huh?

Right after that I was back on the road. Yup, Golf Canada flew me to Vancouver for the Canadian Pacific Women’s Open. Boy was I a hit with those LPGA players. They all wanted a picture. Funny how some of them wouldn’t pick me up. How come? Superstitious I guess. Don’t want to jinx their chances of being on their respective country’s Olympic teams. Can’t say I blame them.

What’s next for me? Well, it will be 112 years since golf was in the Olympics, but Canada will be the defending gold medalist next summer. They tell me because of it I’ll be in high demand leading up to the Games in Rio. That means more television, media and personal appearances with lots of questions about George and his 1904 victory.

Am I up for it? Definitely. As I was telling the other trophies here just this morning, you know, it’s kind of nice being relevant again.