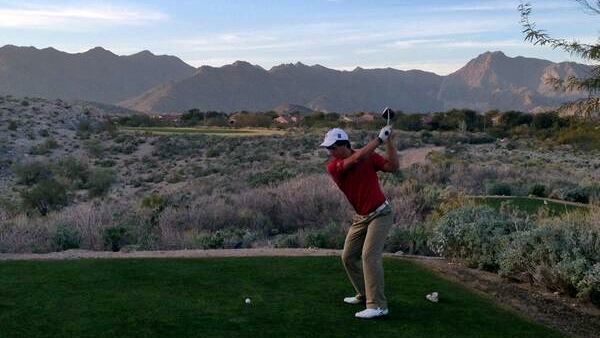 As most of us were adjusting to our post-holiday routines, the athletes of Team Canada’s Amateur Team and Development Squad were sweating it out on the golf course. With their first training camp already completed in late November, Team Canada is now working on fine-tuning the weaker areas that were exposed in the initial testing from the first camp.

Each team was training out of a different facility in the United States from Jan. 2-7 – find out what they were up to below.

“David Woods and the members at the Vintage Club have been incredible hosts and we are very fortunate to train on their world class facilities” he said enthusiastically. “This is the best training camp we’ve ever had“.

Ingram was recently recognized as one of three Canadian coaches to be recognized on Golf Digest’s best teachers outside of the United States list.

Corey Conners, who recently turned 22, took to twitter to express the beautiful scene at The Vintage Club:

Garrett Rank was one of few members unable to join the team in training as he had a special opportunity to referee the World Under-17 gold medal hockey game in Sydney, N.S. Rank, 26, has been a passionate referee for Ontario Hockey League and Junior B games for many years.

Meanwhile, the men’s Development Squad was training out of The Raven Club at Verrado in Phoenix, Ariz., a familiar facility and friend to Team Canada. Robert Ratcliffe, Head Coach of the Development Squad, is leading the new team through their second official camp.

On the women’s side, the National Team was at the Desert Princess in Cathedral City, Calif., under the direction of Head Coach, Tristan Mullally.

Mullally is very optimistic about the year ahead as he continues to prepare his coaching plans for the individual needs of each athlete.

“ We’ve had a lot of fun out here, we’ve used every part of the facilities and they have been super in supporting us in our training” he said. “All of the girls continue to grow with their training, for instance, Anne-Catherine (Tanguay) has made some superb changes in the past six weeks and I am very excited for what’s to come in the year ahead.”

Anne-Catherine Tanguay takes a moment to enjoy the scenery as well:

Last day in Palm Springs! Then off to Mission for a few days and back to school http://t.co/PFQqv2VodJ

Tanguay, a Québec City native, will tee-it-up with her Oklahoma Sooner teammates again on Feb. 9 at the Northrop Grumman Regional Challenge in Palos Verdes Estates, Calif.

Lastly, the girls of the Development Squad were training at The Lodge at Ventana in Tuscon, Ariz.

The Head Coach of the girls Development Squad, Ann Carroll, couldn’t be more excited about the prospects for the athletes and what the future holds.

Did you know: Ann Carroll’s role with Team Canada has also changed for the upcoming season in very similar fashion to that of Ratcliffe. Carroll will now act as the Head Coach of the girls Development Squad but will remain to work in tandem with Mullally on the development of both teams.

In case you missed it…

Brooke Henderson of Smiths Falls, Ont., ran away with the Junior Orange Bowl Championship in Coral Gables, Fla., shooting a final round 67 to win by five strokes.