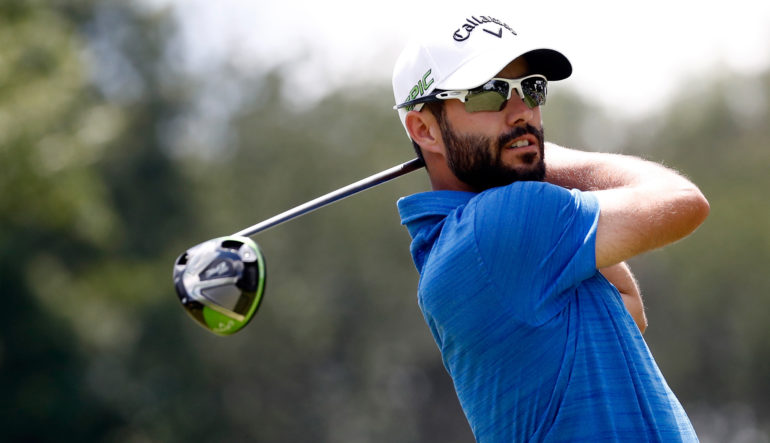 AKRON, Ohio – Thomas Pieters finds golf to be a lot more enjoyable when he’s playing from the fairway.

Sometimes, that includes another fairway.

The big hitter from Belgium ripped a fairway metal from the third fairway at Firestone over the trees and onto the green at the par-5 second hole, leading to one of his three straight birdies to start the third round at the Bridgestone Invitational. Pieters needed another long shot – this one a 30-foot birdie putt that rammed into the back of the cup – to cap off a wild day with a 4-under 66 and a share of the lead with Zach Johnson.

Johnson, who watched Rory McIlroy blast drives 300 yards or more all day, showed that an efficient wedge game works, too. Just like Pieters, he had eight birdies in a round of 65 and holed a 10-foot birdie putt on the last hole.

Johnson now figures to get another front-row seat to the power game.

Pieters and Johnson were at 9-under 201 going into the final round, and it’s particularly meaningful for both of them.

Johnson hasn’t won since he captured his second major at St. Andrews, and he’s just now starting to find some form with his short game. Pieters is a three-time winner on the European Tour who showed his awesome potential at the Ryder Cup last year, and now has his best chance to win in America since he captured the NCAA title at Riviera while playing for Illinois.

Pieters headed for the driving range after the round to figure out his driver. He was 5 under through eight holes and led by three shots when his accuracy took a turn in every direction – mostly to the left. He didn’t hit a fairway after the 10th hole, dropped three shots and fell out of the lead only as long as it took him to make his eighth and final birdie .

“First eight holes I was in the fairway, hit good shots, made putts,” Pieters said. “And the last 11 is a struggle. I just was out of position every hole. Tomorrow I’ve just got to figure out a way to hit fairways. That’s it.”

Johnson only missed two fairways. More importantly, he is giving himself chances and converted.

“Honing in the wedges with that distance control has been the key, and I think especially the scoring irons,” Johnson said. “And then on a course like this, you’ve got to hit the ball in the fairway. This is the best I’ve driven it probably all year. It’s probably the best driver I’ve had in my bag all year, if not ever.”

He said that after playing with McIlroy, who now has hit 39 out of his 42 drives at Firestone at least 300 yards. McIlroy, however, had to settle for a 68 and left him three shots behind in pursuit of his first victory since the Tour Championship last year.

“I felt like I could have got a lot more out of it,” McIlroy said. “I think if I would have walked off today with a 65 or a 66, I would have felt that was a fair reflection of how I played. But only three behind going into tomorrow, I can get off to a fast start and try and put a bit of pressure on the guys up ahead of me.”

One shot out of the lead was Scott Hend of Australia, who got into his first Bridgestone Invitational on a loophole and posted a 63 even with two three-putt bogeys. The World Golf Championship set aside one spot for the winner of a designated event on the Asian Tour. When that tournament never came together, organizers agreed to take the winner of the Order of Merit from the previous year.

Hend is making the most of his chances in his debut at Firestone. After his lone bogey on the par-3 seventh with a three-putt bogey, Hend took only 10 putts over the final 11 holes, three of them from 30 feet or longer, one of those for par.

Hideki Matsuyama, already with one World Golf Championship he won last fall in Shanghai, had a 67 and was two shots behind.

Spieth, meanwhile, needed to channel his inner Hend. He took bogey on the last two holes for a 71 to slip seven shots behind in his bid to win his third straight tournament going into the PGA Championship next week.

Pieters has been looked upon as yet another player to add to the deepening talent pool of young players, especially after his 4-1 record in the Ryder Cup last year at Hazeltine. He has a big game and big expectations, and he can run hot when his game goes sideways.

Pieters made only three pars over his last 11 holes. He took solace going into the final round because he believes he can straighten out his driver, and because he’s in contention for a World GolfChampionship.

“My bad golf is getting better,” he said. “That’s always good.”