Pettersen back with leading 66 at North Texas LPGA 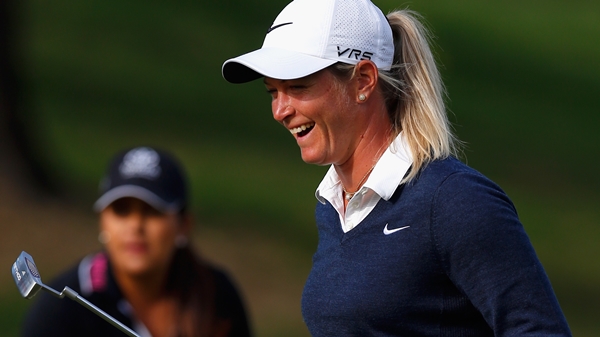 IRVING, Texas – Suzann Pettersen was prepared for a much longer break from LPGA Tour when she started having more back problems.

When she had similar pain a decade ago, she was out of action for about eight months.

But Pettersen missed only a month this time, and the 33-year-old Norwegian is already on top of the leaderboard again after a bogey-free 5-under 66 on Thursday in the first round of the North Texas LPGA Shootout.

“I feel good. I mean very patient. Just really just trying to enjoy being back,” Pettersen said. “I got to kind of pace myself a little bit. I can’t do too much early in the week. So I have a lot of spare time to fool around with. … I really can’t go hit balls on the range. I play whatever I need to play and then just try to give my body a little bit of break.”

Pettersen is playing her second tournament since withdrawing before the Kia Classic in late March, and being told rest was the way to heal her back. The world’s fourth-ranked player tied for 28th in San Francisco last week.

“It’s been a little bit achy early this week. So taking it a little bit careful,” she said. “But last week was nice to be back. It’s always tough when you come back from something like that when you’re so out of play. You’re not even close to be playing. And then next thing you know the pain is gone and you can start hitting balls, and to bring back the mentality straightaway.”

Pettersen took sole possession of the lead when she birdied Nos. 7 and 8, her 16th and 17th holes of the day at Las Colinas Country Club.

Among the 35 players under par was Juli Inkster, the 53-year-old with eight major victories who shot 69. The last of Inkster’s 31 career victories came in 2006.

Wie is playing with confidence and just trying to have fun, and had her 15th consecutive round of par or better. All have come in a stretch when she was the runner-up in the season’s first major, won at home in Hawaii for his first LPGA Tour victory in nearly four years and then had another top-10 finish last week in San Francisco, not far from alma mater Stanford.

“Definitely, my confidence level is up from last year, `’ said Wie, whose five top-10 finishes are already one more than she had in 26 tournaments all last season.