Payne leaves no doubt who calls shots at Augusta 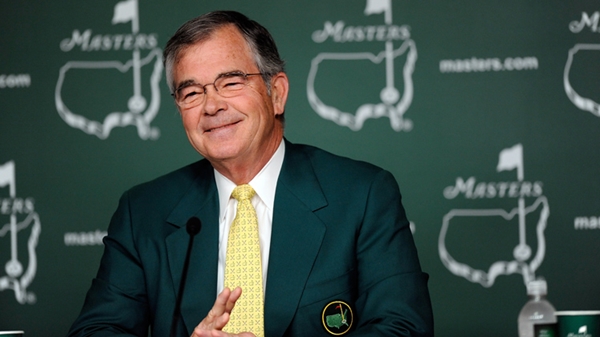 AUGUSTA, Ga. – Eighty years after it was founded, dozens of questions remain about the murky inner workings of the Augusta National Golf Club.

There are none about who calls the shots.

Chairman Billy Payne proved that again Wednesday, tackling a wide range of issues in his annual “State of the Masters” news conference. Since taking over from Hootie Johnson in 2006, Payne, the former Atlanta Olympic Committee CEO, has found himself facing such hot-button issues such as adding women to the Augusta’s membership and Tiger Woods’ suitability as a role model.

This time around, the mood was decidedly lighter. Yet judging by the frequent smiles and nods of assent from the dozen green jackets lining the back of the room, Payne’s pronouncements on the less-weighty issues of his own golf handicap and whether to replace the famed Eisenhower Tree on the 17th fairway – lost after being damaged in an ice storm – aren’t likely to face much headwind.

A reporter asked Payne whether he took the job with a “to-do” list and if so, how many items on it had been resolved.

“I had no list because I didn’t know anything about the job,” he said. “When I became a member of Augusta National, I had dreams of becoming a scratch golfer.”

Once the laughter stopped, Payne turned to Fred Ridley, chairman of the club’s competition committee, and asked, “Have I made it there yet, Fred?”

“Working on it,” Ridley replied.

“However,” Payne added quickly, “I compete quite well here because I’m also chairman of the Handicap Committee.”

Handicaps are hardly the only issue where Payne makes use of his bully pulpit. After several years of vigorously – and very publicly – defending the club’s longstanding policy of barring women, he presided over the quiet addition of former Secretary of State Condoleezza Rice and South Carolina business executive Darla Moore to the membership rolls in August 2012.

With the Royal & Ancient, golf’s oldest governing body, set to vote on admitting women later this year, Payne left no doubt how he planned to vote.

“Well, as I’ve said before, we readily and joyously welcomed our lady members when that happened a couple years ago, and it remains a very good decision on our part. We are so delighted, and I know I speak for everyone, that they are members. …

“Other than that, I would respect their process, their requirement to conduct a vote … and as I’ve said,” he paused, smiling, “I know where one vote is going to be cast.”

Payne also revealed the club no longer maintained a waiting list for Masters passes – among the toughest tickets in sports to obtain – for “some kind of ego purposes,” deciding instead to put any tickets returned to the club into an annual lottery.

But he may have bruised a few egos when asked why total donations to the club’s Masters Tournament Foundation were down significantly from its first year.

“I have a very simple answer. The donations went down because the first year we started it, all the members got a little encouragement from the chairman to donate,” Payne said.

“So when the second year rolled around, there wasn’t anybody left but the new members. So that’s the phenomena you saw.”

The accomplishment Payne touted most was the role Augusta National and the Masters Foundation played in creating and hosting last Sunday’s inaugural Drive, Chip & Putt Championship for youngsters ages 7-15.

“I was trying to make comparisons,” Payne began, “think about how I had been impacted like that before, and I can only go back to, I used to ask my mother, `How will I know when I meet my wife?’

“And she would always say, `Well, you’ll know. You’ll know.’

“And Saturday night at the banquet preceding the Sunday competition, I knew,” he said.

Payne added he was already looking forward to next year’s event, saying he’d heard more than 15,000 kids had already signed up. But Payne also took advantage of the opportunity to poke a little fun at himself.

Playing off his reputation as a promoter – Payne admitted using fuzzy math to convince the International Olympic the average summer temperature in usually steamy Atlanta would be 75 degrees during the games – he said, “You’ve got to ask the U.S. Golf Association to get actual (numbers).

“I am known to exaggerate a little bit.”