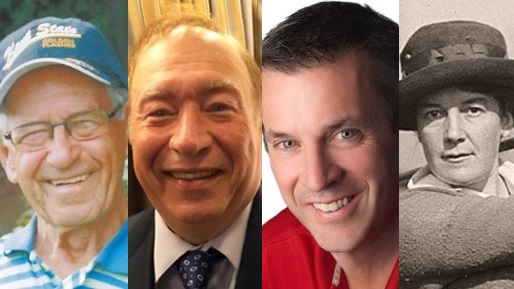 The Golf Association of Ontario (GAO) has announced four new members will be inducted into the Ontario Golf Hall of Fame in a ceremony taking place May 7, 2014 at Wooden Sticks Golf Club.

Earl Fritz
Earl Fritz has been a driving force in the development of the game of golf across Canada as the Executive Director of the Canadian Junior Golf Association (CJGA), an organization that he founded in 1993.

Fritz’s passion for sport development was born out of his career as a competitive hockey player, where he gained an in-depth understanding of the intricacies of amateur sport in Canada. As he reached the twilight of his hockey career, his passion shifted to golf, where he was able to identify gaps in the junior golf development process and saw the need for a competitive tour for aspiring young players.

Working from his basement, Fritz was determined to create a development program that focused on all aspects of the sport including camps, clinics, and competitive events for all ages that would allow young golfers to build fundamental skills and learn how to compete at the high performance level. Not long after launching the CJGA in Ontario in 1993, Fritz had many of his junior tour players representing Canada in international events.

While working full time as a teacher, Fritz donated countless hours to growing the association and within five years the CJGA was offering its programs across the country. He also built mentoring programs for his players that included several PGA Tour professionals including Stephen Ames and Ian Leggatt. Today, the CJGA is a major contributor to the game of golf across the country, hosting more than 80 provincial, national and international events every year, and it is the largest feeder system into Golf Canada’s development programs. CJGA programs have impacted thousands of golfers from coast to coast, with many going on to receive golf scholarships and compete on professional tours. Fritz’s perseverance and dedication to junior golf development has made the CJGA an internationally recognized organization that is a pillar of junior golf development in Canada.

John Henrick
John Henrick has had a career in golf than spans more than 60 years as a professional, mentor, administrator and outstanding tournament player with victories over seven different decades.

Henrick earned his first title in 1948 at the Montreal Athletic Association Pro Am when he was supposed to caddy, but ended up entering and then winning the tournament when another player pulled out. In 1950, working as an assistant professional, Henrick won the Quebec and Canadian Assistants championship, and qualified into the Canadian Open. In 1952 he won the B&A Bursary Championship, earning all-expense paid sojourn to play on the PGA Tour for one year, a feat he would repeat again in 1956. In both 1956 and 1957, Henrick won the Rivermeade Trophy as the low Canadian at the Canadian Open, and in 1958 he played on the Carling Cup team that defeated the team from the United States.

While serving as a club pro and General Manager at several clubs in Quebec and Ontario including Gatineau Golf Club, Highland Country Club, Willows Golf Club and Brampton Golf Club, Henrick mentored many young golfers and professionals. He also captured the 1967 Quebec Open before going on to win three straight Ontario PGA Senior Championships from 1980 to 1982. In 2008, at age 80, he won another Ontario PGA Senior title, making him one of only a handful of golfers to win over seven different decades.

Bob Weeks
Bob Weeks has been one of the most well-known faces in Canadian golf for more than 25 years through his involvement and leadership with SCOREGolf Magazine and SCOREGolf TV on TSN.

A prominent golf journalist, Weeks brings a Canadian perspective to his extensive coverage of golf events worldwide. After joining SCOREGolf as Associate Editor 1987, Weeks assumed the role of Editor-in-Chief in 1993 where he turned the magazine into the successful enterprise that now reaches millions of golf enthusiasts each week. By the end of the 1990’s, the company branched out to include a website, television show, radio show, and a female specific property, Links for Women, becoming the largest and most successful golf media company in Canadian history.

From a reporting perspective, Weeks has authored more than 5,000 print articles ranging from profiles of junior golfers to coverage of major men’s and women’s golf championships. Weeks also writes a highly popular blog on SCOREGolf.com, and has written for GOLF Magazine, Golf Digest, Golfweek, the Globe and Mail, Maclean’s as well as countless other publications throughout the world. He has covered every Canadian Open consecutively since 1988 and over 40 men’s major championships, and has penned a number of best-selling books including “The World’s Greatest Golf Courses” in 1998.

Weeks was one of the first in Canadian sports to use the internet as a reporting tool, and through his guidance the SCOREGolf empire now spans across all mediums from print to broadcast to social media and mobile technology. Weeks has spent a generation promoting all facets of the game of golf to audiences at home and abroad, and his outstanding contributions continue to impact the lives of golfers from coast to coast.

In 1910, she moved to Canada, where she captured three straight Canadian Ladies’ Amateur Championships between 1910 and 1912, while also repeating as the U.S. champion in 1910 and the British champion in 1911. In 1912, she married and moved to the United States permanently, and her 1920 loss to Alexa Stirling Fraser in the 1920 U.S. Women’s Amateur appeared to be her last attempt at a national title. However, in 1924 with a redeveloped swing, she captured her final U.S. Amateur title at age 41, becoming the oldest winner of the championship and also earning the record for the longest gap between wins (15 years).