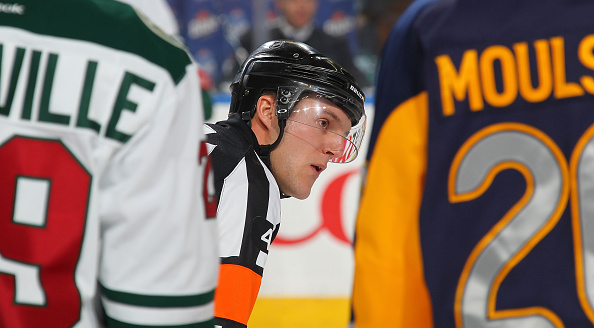 Even though Garrett Rank has a full-time job, don’t call him a part-time golfer.

Rank, who will represent Canada in golf alongside 18-year-old Austin Connelly at the Pan American Games, doesn’t play as much competitively as he used to as a standout at the University of Waterloo and as a member of Golf Canada’s national team.

But the reason is a worthy one.

For more than eight months of the year, Rank works as a referee under contract with the National Hockey League.

The native of Elmira, Ont., worked nine NHL games this season, but spent most of the season with the American Hockey League. None of the nine NHL games were more memorable than his first.

“I settled in pretty well, but we had a video review on the first goal about five minutes in, and they reversed our call on the ice,” Rank said in an interview. “That was pretty funny. Looking back though, it helped settled me down.”

The players on the ice could not have been nicer, according to Rank, who had 250 friends and family in the stands.

“All the guys were first-class,” he said. “I got some signed jerseys from both teams, and a couple taps on the shin-pads from the guys. It was cool.”

Rank was offered an NHL contract in 2014. He couldn’t turn it down, especially after he put his goals on hold in 2011 to fight testicular cancer.

“As silly as it sounds, I never truly believed I had cancer,” said Rank. “I know I did, the test results showed that. But I thought to myself, ‘you’re a young athlete in great shape. You’re a good kid. You never did anything to deserve this.’ I always thought of it as a lie, or that it wasn’t actually true. That helped push me along.”

Now with a clean bill of health, Rank says he has “the best of both worlds” as he pursues his two passions.

“I love my job, but I love being able to come out here (the golf course) for four or five months and work on my game,” he said.

In 2014, Rank captured the Canadian Mid-Amateur Championship to secure a spot in this summer’s RBC Canadian Open, which is scheduled the week after the Pan Am Games tournament. It will be his PGA Tour debut.

“I feel like I probably should have played a couple (Canadian Opens) before, but it just hasn’t worked out,” he said. “But I’m excited to get this opportunity, and I want to go there and do well. I want to see what professional golf at the highest level is about.”

Rank’s whirlwind summer began July 6, where he won a qualifier for the U.S. Amateur by six shots. If he makes it to the finals, which start Aug. 17, he’ll qualify for the Masters.

From there, he received a special exemption into The Players Cup, an event on Mackenzie Tour-PGA Tour Canada.

Next up is the Pan Am Games, which begins Thursday at Angus Glen, the same course where Rank won the 2010 Ontario University Association Championship.

“It’s kind of a home game, and seeing some familiar faces in the crowd will definitely be an advantage,” he said.

“Garrett is a lot of fun, and he’s an unbelievable team guy,” said Ingram. “Regardless of the results next week, we’re going to have a great time.”