New Zealand on the cusp of Astor Trophy victory ; Noémie Paré steps up for Canada 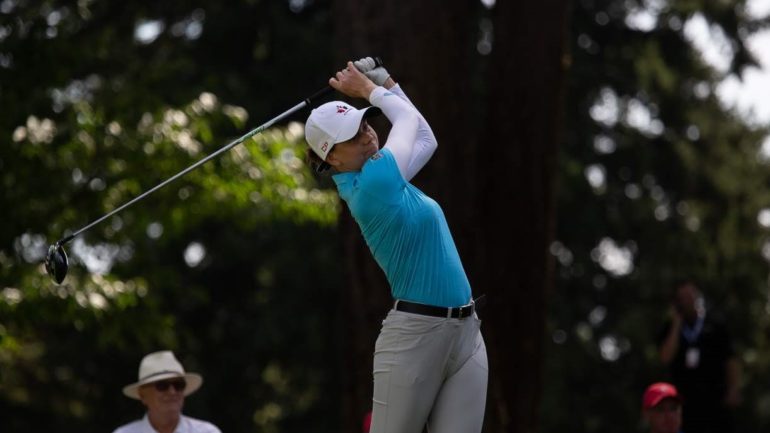 All that is standing in the way of New Zealand’s first Astor Trophy win is Australia.

Or as New Zealand coach Jay Carter likes to call his neighbours, “our little brother.”

New Zealand picked up a half-point Saturday at Royal Colwood Golf Club by tying its match with Great Britain & Ireland in rather dramatic fashion. New Zealand has two-and-half points heading into Sunday’s final day of the competition. Australia, with two points, is the only team that can catch them. The two countries face one another in the final matches on Sunday with the Astor Trophy on the line.

There is just a ‘little’ sporting rivalry between the two countries.

“For it to come down to us and Australia is quite funny, to be honest,” said New Zealand’s Amelia Garvey, who has been her country’s lead player this week. “It is probably the biggest rivalry between the teams here. It is going to be a big day and I am sure both of us are excited to get out there and try to beat the heck out of each other. But we’re friends at the end of the day. It will be interesting to see what happens.”

The Astor Trophy, which has been played every four years since 1959, features teams from Canada, Australia, New Zealand, South Africa and Great Britain & Ireland. Each four-woman team plays one another once during the five-day competition.

New Zealand earned its half-point on the 18th green in the final singles match of the day with Great Britain & Ireland. After winning its two morning foursomes matches, New Zealand struggled in singles and it looked like they could be blanked.

But New Zealand’s Julianne Alvarez earned a tie on the 18th hole when GB&I’s Emily Toy got into trouble with her approach shot. It bounced hard over the green and ended up under a rhododendron. It took her a couple of shots to extricate herself from that situation and Alvarez won the hole with a par and tied the match. Each side earned half a point.

“I can’t believe what just happened, really,” Garvey said. “I think the luck of the Irish was with us, not them, today.”

GB&I needed a full point to hold on to a slim hope of winning the competition. South Africa is tied with Australia with two points, but is off Sunday after having played all four of its matches. GB&I has one point and Canada, which dropped its match with South Africa on Saturday, has a half-point.

Carter once again watched his team rally from behind on Saturday and hopes his players will make it less exciting on Sunday versus Australia.

“It was a gutsy comeback today,” Carter said. “We have pulled a lot of rabbits out of the hat this week and I think all the rabbits have disappeared. So I think we are going to have to front-up tomorrow and own it. But it was something else today.”

Canada had a tough time in its match with South Africa. It lost both of its morning foursomes matches by identical 2&1 margins. The team of Brooke Rivers of Brampton, Ont., and Noémie Paré of Victoriaville, Que., made a spirited comeback in their match. They rebounded from being four-down through 13 holes to climb within one of their opponents, before faltering on the 17th hole.

Paré, who is heading into her senior year at Barry University in south Florida, did win her singles match in the afternoon. She took control of the match with three straight birdies late on the front nine.

“I got a good rhythm going,” Paré said. “I actually made a couple of putts for par of about 10 feet that really got me going. I chipped in on No. 7 and wedged it to a foot on 8. It was a good couple of holes that put me up a bit in the match.”

Paré and teammates Rivers, Mary Parsons of Delta, B.C., and Emily Zhu of Richmond Hill, Ont. haven’t gained the results they had hoped for, but Paré said they want to close strong Sunday when they meet Great Britain & Ireland.

“We are having a lot of fun and we want to come out of here with a good experience,” she said.

The Astor Trophy began as the Commonwealth Trophy and was first held at The Old Course at St. Andrews, Scotland in 1959. The name was changed to the Astor Trophy in 2007 to allow Irish players to compete on a Great Britain & Ireland team.

Australia won the event when it was last contested in 2015 at the Grange Golf Club in southern Australia. Canada has won the Astor Trophy on two occasions, in 1987 and 1979.

Sunday’s foursomes will begin at 8 a.m. and the singles matches are scheduled between 12:30 and 1:40 p.m. Admission is free for spectators.