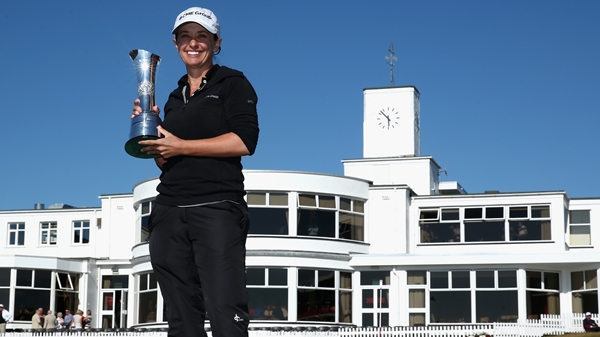 SOUTHPORT, England – Mo Martin hit the best shot of her life, and it made her a major champion Sunday in the Women’s British Open.

From the middle of the fairway on the par-5 18th hole at Royal Birkdale, Martin ripped a 3-wood that she first thought was too short, and then worried might be too long. It turned out to be close to perfect. The ball hit the middle of the pin and settled 6 feet away for an eagle.

An hour later, that turned out to be the winning shot for the 31-year-old American when Inbee Park and Shanshan Feng could not stay under par.

“I think I still need to be pinched,” Martin said.

A strong wind finally arrived off the Irish Sea, bringing an air of unpredictability to the final round of the Ricoh Women’s British Open.

But this was the topper.

Martin is among the shortest hitters in the game, and won with an eagle – her first of the year. It took her six years just to reach the LPGA Tour, and her first victory in her 64th tournament came in a major championship. She closed with an even-par 72 on a day so tough that no one broke par.

Martin was the only player to break par for the championship, finishing at 1-under 287 for a one-shot victory over Feng and Suzann Pettersen.

Feng made eight straight pars – that constituted a charge on this demanding day – and had the outright lead until she made bogey on the 16th hole. A playoff looked likely because the two closing holes at Royal Birkdale are par 5s. Feng missed birdie chances of about 15 feet and 10 feet. She shot 75.

Park, who started the day with a one-shot in her quest to become only the seventh woman to capture four of the LPGA’s majors, fell out of the lead by going long on the par-3 14th hole and never caught up. She missed a 12-foot birdie putt on the 17th, and then put her tee shot into the right rough on the easy 18th hole. Her third shot found a bunker, and Park made bogey for a 77.

Pettersen finished birdie-birdie to share second place, but her hopes in effect ended with a double bogey – her second of the round – on the 13th hole.

That left Martin, a UCLA mighty mite who stands no more than 5-foot-2, alone on the range getting ready for a playoff that never happened.

All because of one shot.

“An absolutely perfect 3-wood,” she said. “When it was in the air, I said, `Sit.’ And then I said, `Stop.’ And then when it was going toward the hole, I said, `OK, I don’t have anything more to say to that ball.’ I actually heard it hit the pin. It’s definitely one to remember.”

Americans now have won the first three majors of the LPGA Tour season for the first time since 1999, following Lexi Thompson at the Kraft Nabisco Championship and Michelle Wie at the U.S. Women’s Open.

A more likely candidate would have been Stacy Lewis, the defending champion, who also started only three shots behind. Lewis didn’t make a birdie until the 18th hole and closed with a 78. Wie missed the cut, and Thompson finished 15 shots out of the lead.

Martin had a three-shot lead going into the weekend, building her strategy on keeping the ball in the fairway. But she had a 77 in the third round, and that figured to be the end of her chances. After two bogeys in five holes to start the final round, she was solid the rest of the way.