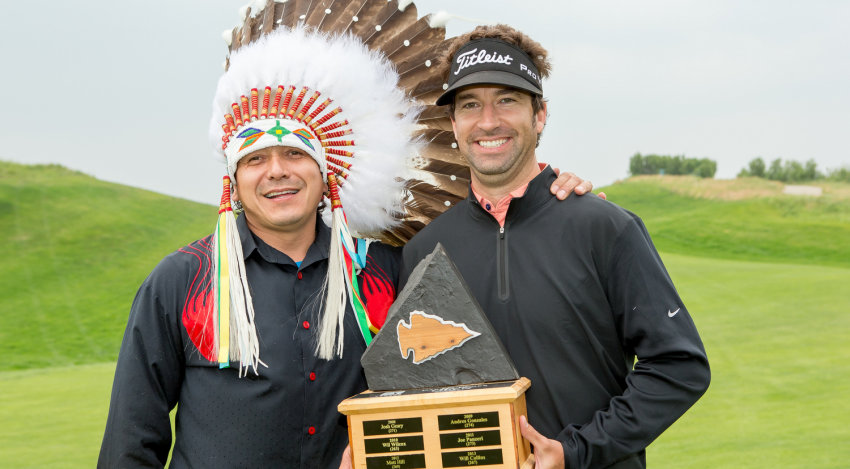 Letzig, a veteran of 114 starts on the PGA TOUR with more than $3.3 million in career earnings on the Web.com Tour and PGA TOUR, carded a final round 3-under 69 to finish at 16-under total, then birdied the second hole of a sudden-victory playoff to earn the victory, his first win in a PGA TOUR-sanctioned event.

The win moves Letzig to fourth on the Order of Merit through four of 12 events, in position to earn status on the Web.com Tour for the 2016 season.

“I was a long way back starting the day, so I really didn’t watch the leaderboard today. I knew I played really good yesterday and my score didn’t show that, so I knew if I came out and played my game I could put a good number in,” said Letzig, who made a 15-foot birdie putt on the second playoff hole, then watched as Spaun and Klaasen couldn’t match with shorter putts, giving him the win. “I had just had that putt on the first playoff hole, and I knew it was mine to win because you don’t often get second chances and those guys gave me a second chance.”

Clutch! Letzig rolls it in and puts the pressure on. pic.twitter.com/tYnag6Q6XJ

Letzig, who owns nine top-10 finishes on the PGA TOUR, said he felt relieved to play at the level he showed in five seasons at the game’s highest level.

“If you look at the stats, I’ve had the most success of anybody out here, so I feel like that’s a lot of pressure I’ve put on myself. I feel like I should be winning every one of these and I haven’t played well up until this week, so it was nice to get out of my own way and play my own game. It was good to play the way I believe I can play,” said Letzig.

Letzig started the day six shots behind 54-hole leader Eric Onesi, but matched Spaun’s earlier clubhouse lead of 16-under on the strength of a birdie at the 17th hole and a par at the last.

“I hit the best shot of the week on 17. I just hooked a 6-iron in there and didn’t think there was any way to get it close to the hole without hooking one in there and just hit it perfect. I made birdie there and saw the leaderboard and knew I had a chance,” said Letzig.

Klaasen, a second year Mackenzie Tour member, looked to be in control of the tournament after reaching 18-under with a birdie on the 15th, but bogeyed his final two holes to fall back into a tie with Letzig and Spaun. Onesi, who appeared to be out of the tournament after making a triple bogey at the par-3 6th, came back to tie the lead with a birdie at 16, but couldn’t get up-and-down for par from a plugged lie in a greenside bunker at 18 and missed the playoff by a shot.

After three pars on the first playoff hole, the trio headed back to the 18th. The second time around, Letzig played the par-5 more aggressively, knocking a pair of drivers just short of the green in two.

“I think the more experience you get, the more comfortable you are under pressure. I hit driver off the deck back there because I knew I wasn’t going to play up. You gotta put pressure on yourself to hit a shot if you want to win a golf tournament,” said Letzig.

Though Spaun and Klaasen both had shorter birdie putts, Letzig put the pressure on with a 15-footer and watched as neither of his competitors could match, giving him the title.

“To pull that shot off and finish it with a birdie was awesome,” Letzig added.

The win comes at an exciting time for the Letzig family, with wife Holly expected to give birth to the couple’s second child in the next two weeks. Though the baby’s due date isn’t for two weeks, Letzig had his family on standby to call PGA TOUR Tournament Director Jamie Wiles to bring Letzig home in case she went into labour.

“Every time I saw him in the cart out there, I was kind of afraid he was coming to get me. To get the whole tournament in and be here all week is awesome, but I can’t wait to get home,” said Letzig.

Top Canadian in the field was Ben Silverman with a final round 1-under 71 to finish T4. Team Canada Young Pro Mackenzie Hughes also had a 71 on the day to finish T11. Fellow teammate Corey Conners had a 1-over round of 73 on Sunday. Albin Choi had a score of 74.