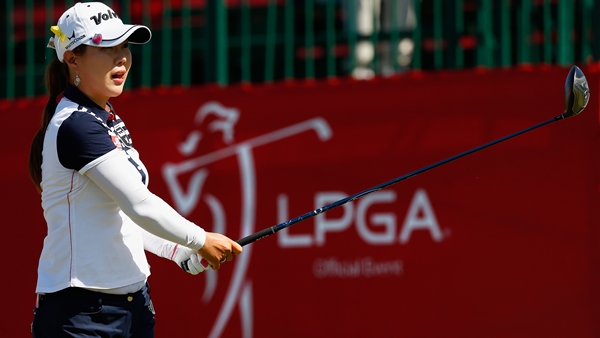 IRVING, Texas – Natalie Gulbis plays with tape wrapped around her achy left wrist. She has an appointment with a specialist next week to finally figure out what is causing the pain she has dealt with for much of the season.

In the meantime, Gulbis is contending for her first LPGA Tour victory in seven years.

Gulbis was tied with Texan Stacy Lewis at 7-under 135, putting the Americans a stroke behind leaders Meena Lee of South Korea and Caroline Masson of Germany after two rounds in the North Texas LPGA Shootout.

With a 65 on Friday, Gulbis had her first sub-70 round this year.

“I haven’t played a lot this year, and I haven’t played very well in the events I’ve played in, so it felt really good to get a good round in the 60s and to get around making some birdies,” Gulbis said. “It felt more like how I played at the end of last year, which I hadn’t seen yet this year.”

Masson, who led after the first two rounds of the inaugural North Texas event last year before tying for 15th, had five birdies and a bogey for her second 67.

Lewis, the No. 3 player in the world, had a bogey-free 64 to match Lee for the best second-round score at Las Colinas Country Club. Lewis had four consecutive birdies before finishing with seven straight pars, and Lee played her first nine holes – the back nine – without a par.

“I didn’t really do anything really crazy different from yesterday other than I putted a lot better, but just played really solid,” said Lewis, who had her sixth runner-up finish last week in San Francisco since winning the Women’s British Open in August. ” I felt nice and relaxed out there, so it was a nice day.”

After her round, Lewis was headed to hit some balls with her 3-year-old nephew wearing a shirt that read, “My aunt is a better golfer than yours.”

In the last five LPGA events, Gulbis has a 67th-place finish while missing three cuts and withdrawing from the Hawaii tournament two weeks ago. The newlywed has completed only 17 rounds this season while dealing with the balky wrist.

“I had a really great offseason. I had a lot of time to work on my game and I felt really good coming into the season, and then I got hurt in like the second or third event of the year and took some time off, so that’s been a bummer,” Gulbis said. “But I had a really nice offseason, so I’ve been trying to fall back on the work that my coach and I did.”

Christiana Kim (69) was alone in fifth at 6 under, one stroke better than first-round leader Suzann Pettersen (71) and four other players. Pettersen had a birdie at the par-5 third hole before consecutive bogeys and then a steady string of pars until a closing birdie.

“I gave myself a lot of good looks for birdies, just couldn’t make much. Good conditions,” said Pettersen, in her only second tournament since missing a month with more back issues. “All good, no complaints.”

Lee, who won the last of her two LPGA Tour titles in 2006, started Friday with an eagle-3 on the 510-yard 10th hole. She followed with a bogey, consecutive birdies, another bogey, three birdies in a row and then a bogey on the par-5 18th.

Her scorecard for the front nine was much cleaner, with birdies on Nos. 3-5 and only pars aside from that. She started the tournament Thursday with a double bogey on the very first hole.

“I’m happy to be done with the second round. I’m really happy,” said Lee, who has her best 36-hole score this season.

Top-ranked Inbee Park, the defending champ in North Texas, was 3 under after a 68.

Michelle Wie was 2 under after rounds of 67 and 73. She won the Hawaii tournament.

Lexi Thompson, the 19-year-old American playing for the first time since become a major champion the first weekend in April, followed her opening 70 with a 71 to reach 1 under.

Seventy-four players made the cut, which was 2 over. There will be a second cut after Saturday’s third round to the top 50 and ties.

Lorie Kane likely won’t have to worry about the second cut. She’s sitting at even par 142 thru 36 holes and sitting tied for 38th.

Sue Kim and Alena Sharp are 1-over and tied for 47th.