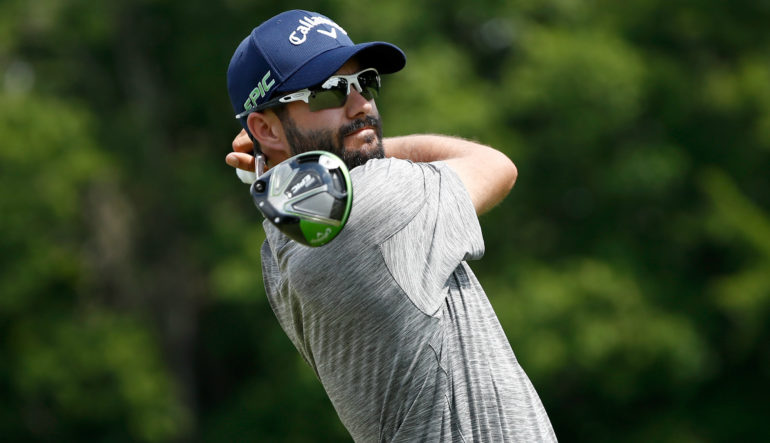 Hideki Matsuyama warmed up poorly and then turned in the best round of his career at the Bridgestone Invitational, a 9-under 61 that tied the course record and gave him another blowout victory in a World Golf Championship.

It was the lowest final round in four decades at Firestone Country Club and led to a five-shot victory over Zach Johnson.

Matsuyama knew from experience that the course record was a 61 because he was in the same group when Tiger Woods shot 61 in the second round in 2013. All it would take was birdies on the last three holes, and like everything else Sunday, the 25-year-old from Japan made it look easy.

He spun a wedge back to 4 feet on the par-5 16th for birdie. He holed an 8-foot putt on the 17th hole and then closed with another approach and settled 6 feet away. Matsuyama, who began the final round two shots behind Johnson and Thomas Pieters, finished at 15-under 265.

He now has won two World Golf Championships by a combined 12 shots, having captured the HSBC Champions by seven shots in Shanghai last fall. It was his fifth PGA Tour victory, and third this season, tying him with Dustin Johnson and Jordan Spieth.

Johnson, winless since his British Open victory two years ago at St. Andrews, pulled within one shot with a long birdie putt at the 11th, but he could do no better than pars the rest of the way and shot 68.

Pieters was never in the game after missing 4-foot par putts on successive holes to close out the front nine. He closed with a 71.

Adam Hadwin of Abbotsford, B.C., shot a 69 to finish the tournament at 7 under and tied for fifth. He began the day three shots back. Mackenzie Hughes (68) of Dundas, Ont., was 9 over for the event.

The only other player with a chance was Charley Hoffman, who also was one shot behind on the back nine. Hoffman was three shots behind on the par-5 16th hole when his caddie suggested laying up because there was no place to get it close by going for the green 282 yards away.

From 282 yards away, @hoffman_charley takes on The Monster head on. #QuickHits pic.twitter.com/klgM2CLoHa

He ripped a 3-wood onto the green and over the back into light rough, chipped weakly to 15 feet and made par anyway. He wound up with a 66 to finish third, though it was a big step in trying to make his first Presidents Cup team.

Matsuyama’s final birdie broke by one shot the lowest final round by a winner at Firestone. Fulton Allem shot 62 when he won the old World Series of Golf in 1993.

Matsuyama stays at No. 3 in the world by a fraction behind Spieth, though he takes plenty of momentum into the PGA Championship next week as he tries to become the first player from Japan to win a major.

He’ll carry plenty of pressure, too.

Matsuyama moved into elite company last fall in a stretch of six tournaments in which he won four times and was runner-up the other two times. He added to his profile with a playoff victory to win the Phoenix Open for the second straight year.

And while he has played well in the majors, including a runner-up finish to Brooks Koepka in the U.S. Open, he has yet to seriously contend.

“I haven’t really played well at Quail Hollow, but hopefully I can keep my game up and do well there,” Matsuyama said. “All I can do is my best. I know a lot of us have tried from Japan to win majors. Hopefully, some day it will happen.”

Rory McIlroy got within one shot of the lead on the front nine with three birdies in six holes until his momentum stalled with a few missed putts. He stumbled on the back nine and shot 69, leaving him in a tie for fifth with Russell Knox, Paul Casey and Adam Hadwin.

Spieth closed with a 68 and tied for 13th in his last tournament before he goes for the career Grand Slam in the PGA Championship. After the Bridgestone Invitational, add one more player – Matsuyama – to the list of major obstacles in his way.