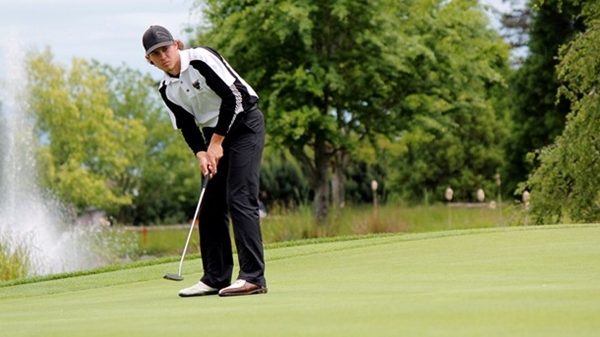 WINNIPEG – The University of Manitoba Bisons’ stole the top spot on the leaderboard at the Canadian University/College Championship on Friday after firing a 3-under 285 in the men’s team competition. On the women’s side the Thunderbirds continued their strong play and hold a 12-stroke lead heading into the final round.

On the men’s side, the Bisons’ rallied during the afternoon draw lighting up Southwood Golf and Country Club with a 3-under 285 to finish at 1-over 865 after 54 holes.

“I’m really pleased, I thought they handled themselves fantastic, it’s a different experience and something they probably haven’t been in being in the last group,” said Bisons’ Head Coach, Garth Goodbrandson. “I’m really excited at the way they handled themselves, they were composed out there and I think they enjoyed it because sometimes you get in that position and you’re scared by it.”

Josh Wytinck and Scott Mazur stepped up for the host team, both carding 2-under 70’s. The squad has never won a national championship and currently lead by two-strokes over the University of British Columbia Thunderbirds.

“We just have to talk as a group and do what we did today,” Goodbrandson continued. “That was kind of our game plan today, focus on our game and not worry about them or any other team, if we do that tomorrow we’ll be just fine.”

As the defending champions, the Thunderbirds stumbled on Thursday carding a 9-over 297. They currently sit in second at 3-over for the championship, while the Western University Mustangs dropped into third place after a 7-over 295.

Individually, UBC’s Scott Secord remains well ahead of the pack at 12-under 204 after a third consecutive under-par round. The Calgary native battled back over his closing three holes, chipping in on the par-4 16th and sinking a long birdie putt on the par-5 18th.

Connor Gann of the University of Victoria Vikes sits in second at 2-under 214, while Russell Bowie of Queen’s University, Université Laval’s Samuel Rochette and Wytinck share third at 1-under par.

On the women’s side, the Thunderbirds’ squad rebounded from their second round, carding a 10-over 226 to soar ahead of Université de Montréal Carabins. The 9-time national champions were led on windy Thursday morning by veteran team member, Kylie Barros who carded an even-par 72. The squad heads into Friday’s final round at 33-over 681 for the championship, 19 strokes ahead of the Carabins. If the Thunderbirds can maintain their lead they will pick up their 10th national championship title at the conclusion of the event.

“We have a great team with four strong players,” Barros said. “We’re feeling confident but we still know we have some work left but ten would be a nice a way to finish my five years at UBC.”

Individually, Barros and the Vikes’ Megan Woodland share first place at 6-over 222. Woodland will aim to pick up her first individual national title on Friday after posting a third round 1-over 73, while her close friend Barros will look to grab her second individual title.

“We’re very close friends, pretty close as proven by our golf games today,” Barros said with a laugh. “It’s fun you always know what you have to do out there, but you also know you have someone supporting you and it makes the 4.5 hour round go by faster.”

The duo currently sits four strokes ahead of Kat Kennedy of the Thunderbirds. Kennedy posted a third round 3-over 75, while 2013 champion, Sabrina Sapone, matched Barros’ low-round of the day with an even-par 72 to jump up to solo fourth on the leaderboard at 11-over 227.

The field was cut to top-10 men’s teams and the top-6 women’s teams following the conclusion of play on Thursday. Individuals within 15 shots of the lead also made the 54-hole cut.