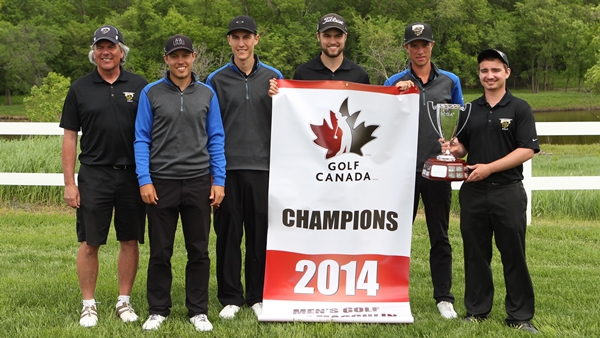 Winnipeg (Golf Canada) – The University of Manitoba Bisons claimed their first national title on home soil at the Southwood Golf and Country Club on Friday,  while the University of British Columbia Thunderbirds took home their 10th Canadian University/College Championship.

In the men’s competition it couldn’t have been sweeter for the Bisons who stormed back over the final two days of the championship to win by 12 strokes over the Thunderbirds.  The local favourites posted a 4-over 292 during Friday’s blustery final round in front of a large gallery.

“I’m just so proud of these guys, proud of the program and so appreciative of all the people that have helped us over the years,” said Bison’s Head Coach Garth Goodbrandson.

Scott Mazur led the Bisons’ squad over the final 18 holes carding a 1-under 71 – the only under-par round of the day at Southwood.

“We kept on talking about it all week to stay within yourself because it’s only natural to think about the final results,” Goodbrandson continued. “I think the key was they’re an experienced group and when they found themselves getting too far ahead they came back and just stayed in the moment.”

Individually, Scott Secord of the Thunderbirds led wire-to-wire for his first national championship title. The Calgary native finished at 7-under 281, seven strokes ahead of Connor Gann of the University of Victoria Vikes and Queen’s University’s Russell Bowie who finished at even-par 288.

“One of my goals coming into this week was to be low everyday and I think I accomplished that,” Secord said. “I made good strides mentally but unfortunately our team came second so hopefully next year we’ll get the title.”

On the women’s side, the Thunderbirds cruised to their 10th national championship title after a 17-over 233 final round. The squad dominated the field finishing 35 strokes ahead of the Université de Montreal Carabins.

“It feels so great, last year we came in and we didn’t quite have the finish that we wanted but this year we had a really strong group of girls,” said Thunderbirds Captain, Casara Hong. “Our team played really well and persevered through all the conditions. We had some really good competitors out here this week, it was tough competition.”

Playing a few pairings ahead of the final group, the Vikes’ Megan Woodland carded a 2-over 74 to finish at 8-over 296 for the championship. From behind the 18th green she watched her close friend Kylie Barros leave her chip shot short to lose by one. The wins marks Woodland’s first individual title after a handful of close calls.

“It feels amazing and to be honest it’s kind of been my goal since about my second year to come here and to finally win one,” Woodland said. “I’ve come really close the last few years and to pull it off it feels great but it’s a little bittersweet having Kylie come in second but I’m really happy.”

Barros finished at 9–over 297 after a final round 3-over 75, while Sabrina Sapone of Université de Montreal Carabins end the championship in solo third at 9-over par.

For more information on the 2014 Canadian University/College Championship including final results click here.