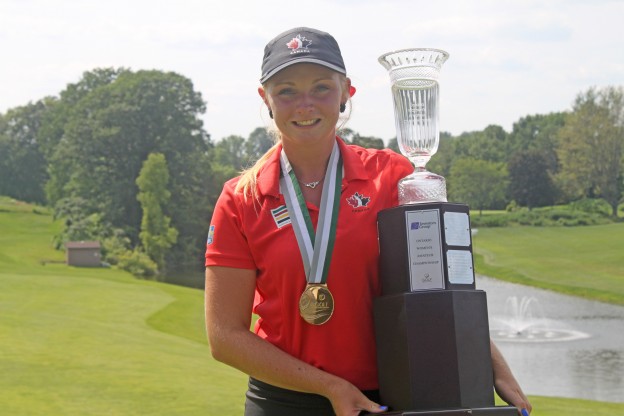 UNION, Ont. — In a week that had a little bit of everything from unpredictable weather, to penalty strokes to the round-three leaders, things finally came to a conclusion at the Golf Association of Ontario’s (GAO) Investors Group Women’s Amateur on July 10 at the St. Thomas Golf & Country Club, the 100th anniversary of the event.

Heading into the final round, Orangeville’s Brittany Marchand held a two-shot lead. However, it would be a lights-out performance by Maddie Szeryk that would be the final-round story as she shot a four-under (68) to overcome the deficit and hoist the Marlene Stewart-Streit Trophy.

Szeryk, a Canadian-American dual citizen, makes her home in Texas, where she also attends Texas A&M, but has family connections to London, Ont., with her grandparents residing there. She is also a member of the Golf Canada National Team.

The 18-year-old Szeryk wasted little time in grabbing the lead. She birdied the first hole and then added three more on the fifth, sixth and eighth to lead at the turn. She was able to keep up her strong play on the back nine in order to take the win at seven-under for the tournament (73-70-70-68).

After the win, Szeryk spoke about what it meant to win the 100th Ontario Women’s Amateur. “It is a pretty big honour to win the 100th one, that is amazing!” Said Szeryk. “I came into the tournament hoping to play well and am really happy with the outcome. Coming into the tournament I knew it was a huge event and that it would mean a lot to win it. My family is from London, so to win here made it even better.”

When asked about what made the difference this week, Szeryk credited her play to having a solid all-round game. “It really was everything. I was focused on each shot, playing my plan and hitting the right shots. Today was really solid.”

Sharing the silver medal were Marchand and Victoria, British Columbia’s Naomi Ko. Marchand, the National Team and Brampton Golf Club member had her struggles during the final round and just couldn’t find her consistency. She finished the day one-over (73) and four-under for the Tournament (69-73-69-73).

As for Ko, she got off to a hot start with back-to-back birdies on the first two holes. She was able to get to three-under for the day before the turn but gave one stroke back with a bogey on the tenth. Despite her best efforts, she was unable to make a run at the top spot and had to settle for a share of second with a final round two-under (70) and four-under for the tournament. (71-68-75-70).

Based on their results, Marchand, Toronto’s Elizabeth Tong and Ottawa’s Grace St-Germain all move on to represent Ontario, in the inter-provincial competition, at the Canadian Women’s Amateur, July 28-31, at the Riverside Country Club in Saskatoon, Saskatchewan.