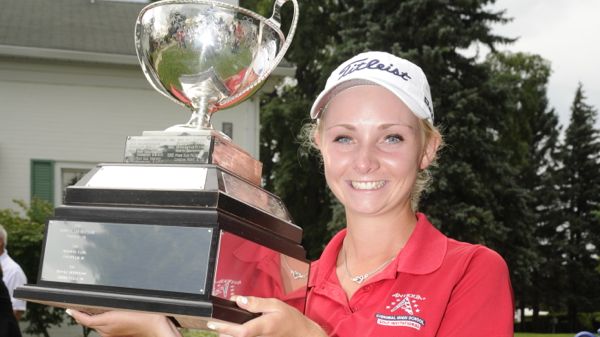 No one could stop Maddie Szeryk of Allen, Texas, this week at the Royale Cup Canadian Junior Girl Championship at Cherry Downs Golf and Country Club in Pickering, Ont.

The 17-year-old soared past the field to capture her first Royale Cup Canadian Junior Girls Championship by 14 strokes, after a final round 2-under 70.

“It feels pretty awesome, I know this is a really big tournament,” Szeryk said. “It was great to be able to play well and win.”

Szeryk, a dual-citizen of the United States and Canada, led from start to finish in her national championship debut in Canada. Over the course of the 72-hole championship she carded four eagles and 12 birdies to finish at 5-under 283 (71-69-73-70) for the tournament.

“I was just trying to come in, do my thing, play well and see where it led,” she continued. “I drove the ball pretty well this week and I made a couple of putts so that really helped.”

Finishing in solo second and earning the Juvenile title for the second straight year, was defending champion and Team Canada’s, Brooke Henderson, 15, of Smiths Falls, Ont. Henderson carded a final round even-par 72 to finish at 9-over 297 (76-77-72-72) for the championship.

Rounding out the top-five were, Alyssa Getty, 16, of Leamington, Ont., and Sabrine Garrison, 17, of Calgary, who both finished at 17-over 305 for the championship.

In the Inter-Provincial Team competition that concluded on Wednesday, the Team Alberta contingent of Jaclyn Lee, Sabrine Garrison and Brianna Carrels carded a second round 7-over 151 to capture their first Inter-Provincial title since 2004. The squad finished at 19-over 307 for the championship, 14 strokes ahead of Team Quebec.