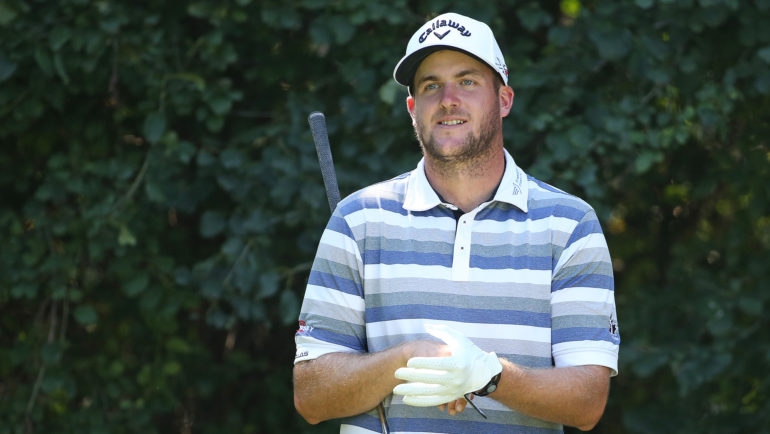 Hot out of the gate, the University of Alabama alum made birdie on the first hole of the day and proceeded to play the par-5s in a combined 5-under par.

Adding seven more birdies throughout the day, the 12-under 60 matched the second-lowest round on the Mackenzie Tour this season.

“I got off to a good start, making a birdie, and hit both my approach shots on the par-5s inside 15 feet, two-putting the first one, and then I managed to make the second one and got going,” said Love. “It was a great day.”

Fresh out of the shrink wrap, Love debuted a new putter, which he says “got hot” at just the right time.

“I’ve been telling my teacher and my dad that if I get the putter going, everything is going to take care of itself,” said the 25-year old. “I’m beyond ecstatic with how it’s going with the putter, I’ve been struggling all year, so it was fun to see it get in the hole today.”

Turning to the back nine, Love played hole Nos. 10-13 in 5-under, putting himself at 10-under with five holes to play. Making birdie on No. 16, Love had a chance to match Greyson Sigg’s feat from the GolfBC Championship, finishing with three consecutive birdies to shoot 59.

“We had to wait for about 25 minutes on No. 17 tee and I think I started thinking about it too much,” said Love. “I knew if I made birdie there, I would have a putt on 18 to shoot 59, but I’m not mad about it. It’s the first time I’ve been in that position, that close to shooting 59, so I had a blast and I’m ready to learn from it and go build on it [Friday].”

With his ball off the green on No. 17 following his fourth shot, Love chipped in for par from 25 feet, and on No. 18 he walked in a 15-foot birdie putt from the fringe to take a two-stroke lead into the second round.

“I knew it was going in before I hit it. I had the perfect read and I had been making everything all day,” said Love, who has made the cut in all three of his Mackenzie Tour starts this season. “It was all about the putter, everything I hit either lipped out or went in.

Two strokes back of Love is Jared Wolfe, who matched the Oakfield course record, at the time, with a bogey-free 60.

Taylor Pendrith carried the momentum from his runner-up finish into the first round in Halifax, posting a 7-under 65 and is the low Canadian heading into the second round.