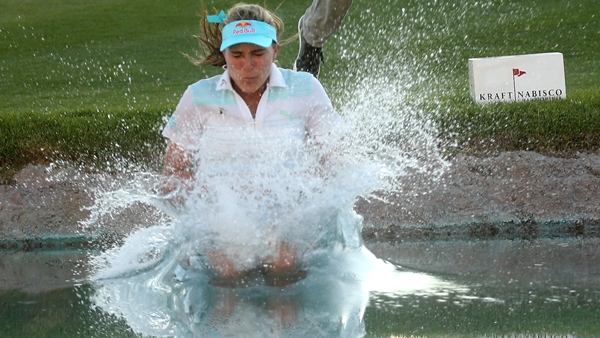 RANCHO MIRAGE, Calif. – Lexi Thompson left Michelle Wie behind Sunday – off the tee and on the leaderboard in the Kraft Nabisco Championship.

The 19-year-old Thompson closed with a bogey-free 4-under 68 at Mission Hills for a three-stroke victory over Wie. Thompson birdied four of the first nine holes to open a five-stroke lead and parred the final nine.

Wie birdied the final hole for a 71. She used her driver only four times, choosing to hit fairway-metal stingers on the other 10 driving holes – leaving her as much as 60 yards behind Thompson. When both hit 3-woods, Thompson also had the advantage.

Thompson finished at 14-under 274 for her fourth LPGA Tour victory. She opened with a 73, shot a tournament-best 64 on Friday and had a 69 on Saturday to tie for the lead with Wie at 10 under. The 6-foot Florida player had only one bogey – when she missed a 3-footer on the par-5 18th Saturday – in her last 55 holes.

Thompson won the 2011 Navistar LPGA in Alabama at 16 to become the youngest winner in tour history, a mark broken by Lydia Ko in the 2012 Canadian Women’s Open. Last year, Thompson won the LPGA Malaysia and Lorena Ochoa Invitational.

Wie has two tour victories, winning the 2009 Lorena Ochoa Invitational and 2010 Canadian Women’s Open. She has been in the top 16 in all six of her starts this season.

Thompson hammered a drive 40 yards past Wie’s 3-wood on the par-4 opening hole and took the lead with a 15-foot birdie putt. Wie pulled even with a birdie on the par-5 second, chipping to 1 1/2 feet after leaving her second shot just short of the green.

Wie bogeyed the par-4 third, missing from 6 feet after a short chip.

Thompson picked up another stroke on the par-3 eighth when Wie missed a 2-foot par putt, and pushed her lead to five with an 8-foot birdie putt on the par-5 ninth.

Wie birdied the first two holes where she used her driver, hitting it past Thompson on the par-5 second and 11th. Wie also hit driver on the par-4 13th, setting up a wedge that she hit to 4 feet. But she left the birdie putt short to remain four strokes back.

Team Canada’s Brooke Henderson shot a 2-over par 74 Sunday. The 16-year-old from Smiths Falls, Ont. tied for 26th with two others at 1-over 289. She’s currently ranked 6th in the World Amateur Golf Rankings, but expect the defending Canadian Women’s Amateur Champion to jump a spot or two next week.

Notes of encouragement for Henderson came in from across the Twitterverse. Here is a brief sampling…

Minjee Lee, the 17-year-old Australian who tops the World Amateur Golf Ranking, was low amateur. She closed with a 72 to tie for 24th at even par. 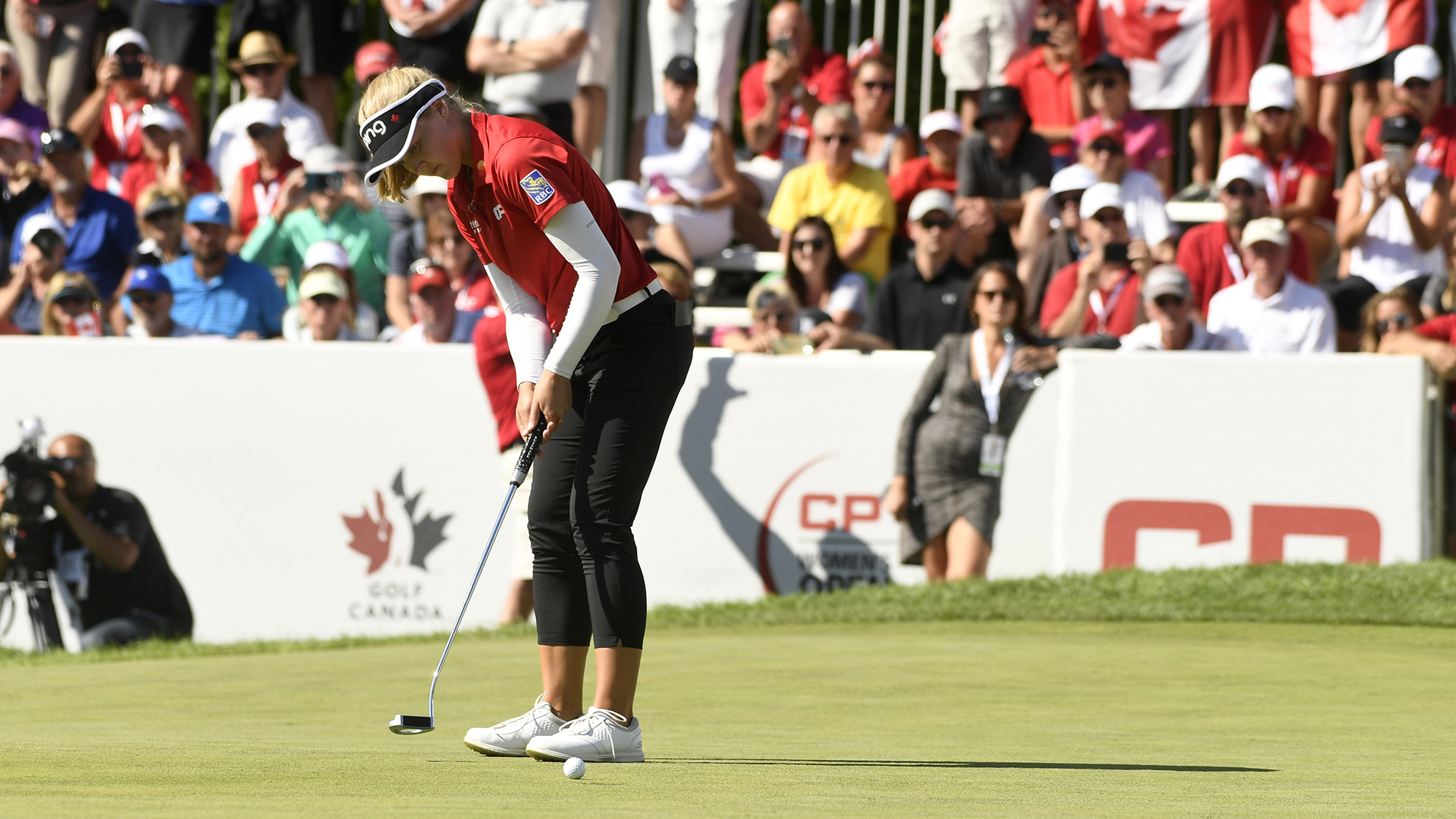