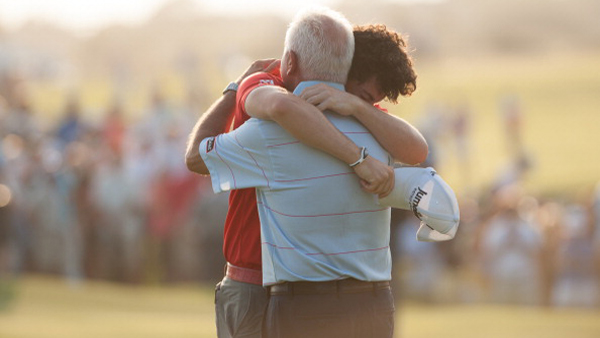 Every father plays a unique role in a child’s life. Fathers often hold a special place in our hearts because of the unique things tha t they did with and for us as kids. As adults we treasure that special time together even more. More often than not, a father will introduce his daughter or son to sport and sometimes, that sport happens to be golf. The chance t o spend four or five hours on the course with your dad is special enough, but ho w about growing up alongside one of the legends of the game, onl y to turn into a fine professional yourself? We honour all dads this Father’s Day with a look at some of the most famous father and child player combinations in golf history.

Tom Morris Sr. (or Old Tom Morris) was one of golf’s founding fathers. A four-time British Open champion, Morris Sr. held the record for largest margin of victory at a major (14 strokes) until 2000 when Tiger Woods won the U.S. Open by 15. He was also a jack-of all- trades in the golf business, acting as a greenskeeper, club-maker, ball-maker, golf instructor and course designer. Young Tom Morris also won the British Open four times, and holds the record for being the youngest major champion in golf’s history (he was 17 in 1868). He unfortunately died at only 24 years of age.

The Blacks make up the lone father-son duo to be enshrined in the Canadian Golf Hall of Fame. The elder Black emigrated to North America from Scotland with his brothers to become golf professionals in the early 1900s. He worked as a club pro in Ottawa and Montreal before going west to Vancouver. He won four PGA of Canada Championships and was runner-up in the 1911 Canadian Open. The younger Black captured three B.C. Amateurs and the 1939 Canadian Amateur Championship. In a story that legends are made of, he came from nine strokes behind to win the Vancouver Jubilee Open as a 24-year-old amateur, nipping Byron Nelson by three to become the first Canadian to win a PGA Tour event.

Although a late bloomer, Julius Boros – who didn’t turn professional until he was 29 – sure made up for lost time. A threetime major champion, the elder Boros still holds the record for being the oldest major champion of all time. He captured the PGA Championship in 1968 at the age of 48. Julius Boros was inducted into the World Golf Hall of Fame in 1982 and passed away in 1994. His son Guy Boros has a handful of Canadian connections. He captured his lone PGA Tour victory in 1996 at the Greater Vancouver Open, and played on the Canadian Tour for four years including 1991, when he was the Tour’s leading money winner

Saskatchewan native Gayle Hitchens Borthwick earned her way into the Canadian Golf Hall of Fame thanks a competitive career which included three U.S. Senior titles, wins at both the Canadian Amateur and Canadian Senior, and numerous provincial championships. She learned the game under the watchful eye of her father, Capilano’s assistant professional Bob Hitchens. Her father-in-law likely played an influential role in her game as well; the legendary Dick Borthwick served the Hamilton Golf and Country Club as head pro for almost three decades and claimed the 1949 Canadian PGA Championship.

Jay Haas is a nine-time PGA Tour champion and holds the record for most cuts made on the PGA Tour with 562. He’s a Ryder Cup and Presidents Cup champion as well and continues to play well on the Champions Tour, with 16 wins on the senior circuit. Son Bill was the 2011 FedEx Cup champion (pocketing a cool $10 million in the process) and is a five-time winner on the PGA Tour. The Haas duo also has the unique distinction of being one of just two father-son pairs who have won the same PGA Tour event. Jay captured the 1988 Bob Hope Classic, while Bill won the 2010 edition of the tournament.

Dave and Jon Mills make up part of a legendary Canadian golf family. Dave worked with the Golf Association of Ontario for nearly 20 years, and retired in January of 2014 as its Executive Director. Dave’s son Jon won the Ontario Amateur Championship in 2001 after graduating from Kent State University in 2000. He captured the 2003 MTS Classic on the Canadian Tour and is a two-time winner on the former Nationwide Tour. He currently holds conditional status on the Web.com Tour. Now that Jon has a daughter, can golf games with her father and grandfather be far behind?

Craig and Kevin Stadler made history as the first father-son duo to play together at the Masters. Craig is a 13-time winner on the PGA Tour, including his 1982 green jacket victory. The younger Stadler captured his first PGA Tour victory earlier this year at the Waste Management Phoenix Open. His nickname is “Smalrus,” a play on his father’s nickname “The Walrus

Robert Trent Jones Junior and Senior, along with Jr.’s brother Rees, make up the first family of golf course architecture. It is said that Robert Trent Jones Sr. worked on nearly 500 golf courses in his lifetime, including London Hunt Club, Capilano (which he worked on with famed Canadian architect Stanley Thompson) and The Marshes in Ottawa (a course that he worked on with his son and was completed after his death in 2000). Robert Trent Jones Jr., meanwhile, has become a well-known designer in his own right. He’s perhaps best known for his design at Poppy Hills in California, and Chambers Bay in Washington (the host course of the 2015 U.S. Open).

Although golf’s newest wunderkind has already captured two majors and four other PGA Tour events, Rory McIlroy is only 24 years old and hopefully has a long career still ahead of him. However his successful golf career may never have started without the counsel of his father Gerry, a fine player in his own right. The elder McIlroy taught Rory everything he knew about golf while Rory was still a small child. Gerry played to a scratch handicap, and has won the club championship at the prestigious Holywood Golf Club in Northern Ireland.

One of the most outspoken members on the PGA Tour, Ian Poulter has established himself as a true contender on tour. Could his son Luke be following in his footsteps? Luke, 9, won a U.S. Kids Golf event in Orlando earlier this year by seven shots. Luke’s famous father was his caddie that day, and sent out a handful of excited tweets to his 1.6 million followers as the event went on.

Bubba Watson is a crier. Everyone’s seen him tear up on TV but nothing was as emotional as Watson’s 2012 Masters victory. He had just adopted his son Caleb – with Canadian wife Angie – that year after losing his own father to throat cancer. Caleb has already shown some significant golfing prowess in the YouTube videos that Bubba has posted and celebrated with his dad in the winner’s circle at Augusta again this year.