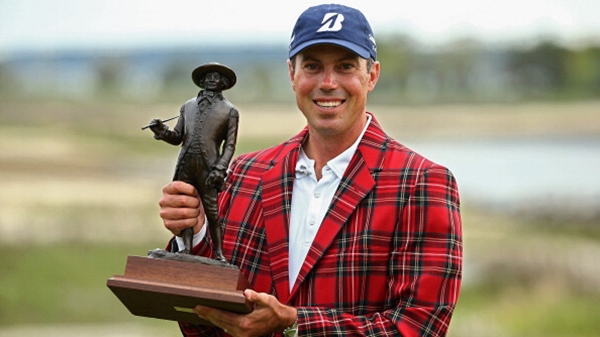 HILTON HEAD ISLAND, S.C. – Matt Kuchar overcame a four-stroke deficit to finally finish on top, when his stunning chip-in on the 18th hole gave him a 64 and a victory at the RBC Heritage on Sunday.

Kuchar was four shots behind Luke Donald at the start but made that up with seven birdies on his first 10 holes. He had a birdie putt of less than eight feet at the par-3 17th, but three-putted for bogey to fall into a tie for first.

Kuchar was in more trouble in a bunker at Harbour Town Golf Links’ closing lighthouse hole. That’s when he blasted out and watched the ball rattle in for birdie. Kuchar punched the air and raised his arms in celebration of what would be his seventh career PGA Tour win.

Donald had two holes to catch Kuchar after the chip but couldn’t do it. He missed a 28-foot birdie putt at the 17th hole, then saw his own try at a chip-in birdie slide past the cup.

Kuchar finished at 11-under 273 to win $1.044 million and his first trophy since the Memorial last June.

Kuchar has spent a month of Sundays in the thick of things, only to come up short. He was two strokes behind winner Steven Bowditch at the Texas Open on March 30, lost a playoff to Matt Jones’ 42-yard chip-in on the first extra hole in Houston the next week, then was tied for the lead at Augusta National last Sunday before four-putting the fourth hole and finishing tied for fifth.

Donald shot 69 to finish at 10 under and earn his fifth top-three finish in his past six appearances at the RBC Heritage.

At sixth in the world, Kuchar was the highest-ranked player competing the week after the season’s first major, when most of golf’s biggest names were taking a needed break.

But Kuchar, smiling all the way, hoped to ride the momentum of his near misses.

Sunday finally brought the sunshine the tournament had lacked all week. Players got the bonus of easy, softened greens from three days of moisture.

The birdies were flying from the start, and Kuchar took full advantage.

That Donald was in the chase again here was no surprise. The steady Englishman, once No. 1 in the world, says Harbour Town’s tight fairways and small greens are a perfect layout for a player like him who isn’t the longest hitter on tour.

Donald drove his ball way left out of bounds on the sixth hole for a double bogey and, after climbing back into the hunt with birdies on the seventh and ninth, hooked his drive into the water left on No. 10 for a bogey.

Donald kept charging, though, and drew within a stroke of Kuchar’s lead with consecutive birdies on the 11th and 12th holes. He could get no closer, finishing his round with six pars.

Martin, who had missed seven cuts in his past eight tournaments, reached 10 under with back-to-back birdies on the 13th and 14th holes.

Martin’s run ended when he couldn’t squeeze through some pine trees after driving into the rough at the par-5 15th. His ball struck a tree and scooted into more trouble across the fairway. He took bogey to drop two shots off the lead.