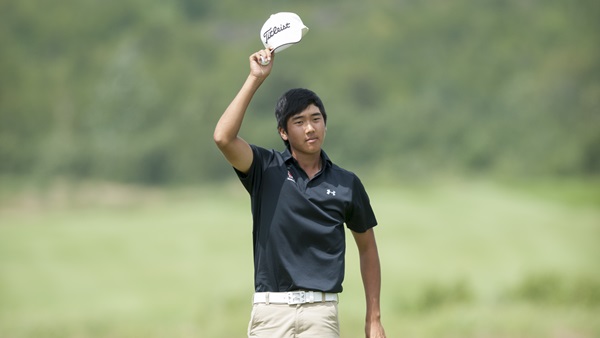 Kevin Kwon, 18, of Pitt Meadows, B.C. carded a third round 3-under 69 to maintain his lead going into Friday’s final round of the 2013 Canadian Junior Boys Championship at Timberwolf Golf Club in Sudbury, Ont.

“I felt better today over the ball today” said Kwon. “I hit better shots, I made a lot more putts and felt really focused. I had a bit of a tough finish but other than that I played well today.”

Kwon, a member of Team Canada’s Development Squad, now has a 54-hole score of 9-under 207 (64-74-69). Kwon will attempt to bring home his second Canadian Junior Boys title tomorrow after capturing the 2011 Canadian Junior Boys Championship when he also took home the Juvenile division title.

Kwon’s Development Squad teammate Matthew Scobie, 18, of Ajax, Ont., shot 2-under 70 on Thursday and heads into the final round in third place with a tournament total of 5-under 211 (68-73-70) – Scobie and Kwon were paired together on Thursday.

“It was fun to play with my buddy Matt,” Kwon commented. “You want your friends and teammates to play well but it’s also fun to compete against them.”

Harrison currently leads the Juvenile Boys division by six strokes over Curtis Chan, 16, of Richmond, B.C., who carded an even par 72 in his third round for a tournament total of even-par 216. Jordan Lu, 16, of Vancouver, B.C., Étienne Papineau, 16, of Bromont, Que, and Sam McNulty, 16, of Port Perry, Ont., all sit in a tie for third at 2-over 218.

Chris Wilson, 18, of Toronto, Ont., carded the second hole-in-one of the tournament on Timberwolf 187-yard sixth hole. Philippe Patterson, 17, of Bathurst, N.B., carded a hole-in-one in the first round on the 13th hole.