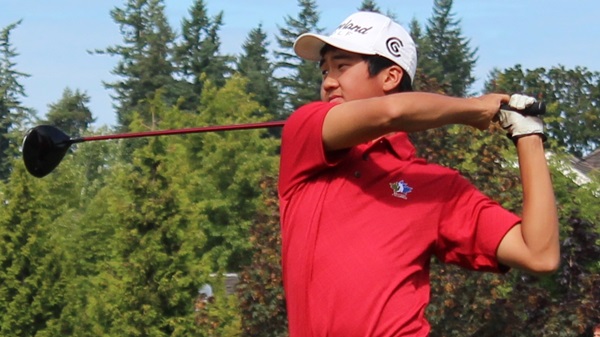 Kevin Kwon, 18, of Pitt Meadows, B.C. carded a second round 2-over 74 to maintain his lead heading into the third round of the 2013 Canadian Junior Boys Championship at Timberwolf Golf Club in Sudbury, Ont. Kwon shot 8-under 64 in his opening round on Tuesday.

“The conditions were tougher today and I found it harder to score,” said Kwon. “It was frustrating considering how well I played yesterday, but I grinded it out and it could have been a lot worse.”

Andrew Harrison, 16, of Camrose Alta., sits two strokes behind Kwon in second place at 4-under 140. Harrison carded a 3-under 69 second round, tied for best round of the day.

“I’ve been able to putt good both days,” said Harrison following his second round. “It’s great to see how my game stacks up against the best in Canada.”

Harrison currently leads the Juvenile Boys division by four strokes over Curtis Chan, 16, of Richmond, B.C., who carded a 5-over 77 in his second round for a tournament total even-144. Marc Casullo, 16, of Aurora, Ont., is in third place at 1-over 145.