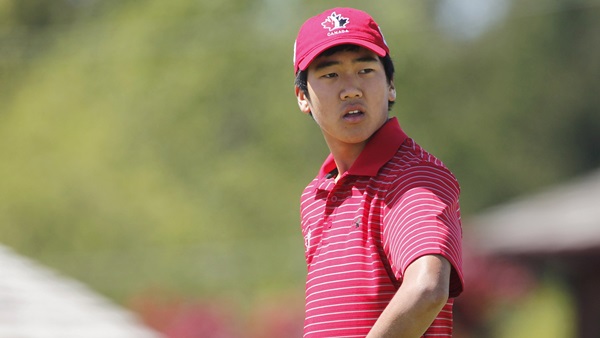 Kevin Kwon, 18, of Pitt Meadows, B.C. carded an opening round 8-under 64 to take a three-stroke lead heading into the second round of the 2013 Canadian Junior Boys Championship at Timberwolf Golf Club in Sudbury, Ont.

“When you shoot 64 it means everything is really working well for you,” said Kwon. “I hit the ball in the right places, I putted fantastic and didn’t make many mistakes so it was kind of like I was in cruise control.”

“I think I’m a smarter golfer than I was last year,” Kwon continued. “I think that’s going to help me a lot this year.”

Austin James, 17, of Bath, Ont., and Curtis Chan, 16, of Richmond, B.C., currently sit three strokes behind Kwon in a tie for second after shooting 5-under 67’s to open the tournament. Kwon’s Development Squad teammate, Matthew Scobie, 18, of Ajax, Ont., sits in fourth place at 4-under 68.

In the inter-provincial competition, Team Ontario leads by one stroke over Team Alberta with a combined score of 1-under 143. Team Ontario consists of Jake McNulty of Port Perry, Ont., Ryan Borg of Caledon, Ont., and Nicholas Ross of Dundas, Ont. Team Alberta is in second place with a combined score of even 144. Team Newfoundland and Labrador rounds out the top three at 2-over 146.

The shot of the day at the Canadian Junior Boys Championship came from Philippe Patterson, 17, of Bathurst, N.B., who recorded a hole-in-one on Timberwolf’s 161-yard 13th hole.