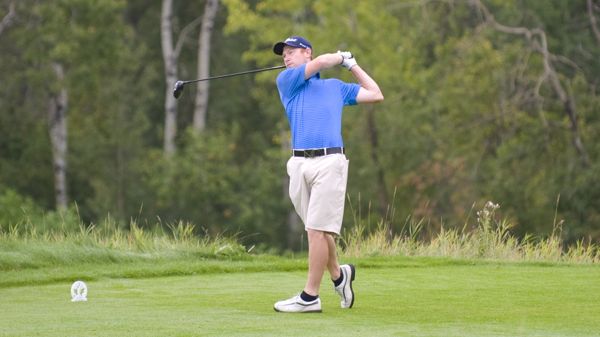 Kevin Carrigan continued his solid play at the Canadian Men’s Mid-Amateur Championship, carding a 3-under 68 on Wednesday at Blackhawk Golf Club.

The defending champion fired a 4-under 31 to open his second round but stumbled with two late bogeys on over his final three holes to finish at 11-under 131 for the championship.

“I left several out there on the front,” Carrigan said. “I think the only two greens I missed today were No. 16 and No. 18 where I made bogey.”

The Victoria, B.C., native set a new competitive course record yesterday at Blackhawk with a 8-under 63 and currently leads by four strokes over David Bartman of Los Angeles, Calif. Despite not making as many putts as he’d like, Carrigan said he has a ton of confidence in his swing this week.

“I’m not making much and it’s frustrating because every shot I hit is on my line,” he continued. “I’m just not getting the putts to go, I burned probably six or seven edges today but my swing feels great.”

Team Canada’s Garrett Rank carded the round of the day at Blackhawk after a 7-under 64. The Elmira, Ont., native fired a 5-under 30 on the front-nine after an eagle on the par-5 4th hole and added a second after pitching in from 30 yards on the par-4 9th.

“I should have been way lower,” Rank said. “I three-putted No. 18 and missed a short three-footer on five.”

Playing alongside Carrigan, Rank was gunning for the new course record after getting it to 8-under through 14 holes but lost momentum after a bogey on the par-5 15th.

“I was playing so good that on No. 15 I hit it a little left off the tee and instead of laying up and hitting a wedge close like I was all day I tried to hit the green,” he said. “I turned it into a bogey and I shouldn’t be making bogeys on that hole.”

California’s David Bartman carded a 3-under 68 to grab solo second at 7-under 135, while Rank sits in third at 6-under 136. Dave Bunker of Woodbridge, Ont., Michael Rutgers of Windsor, Ont., and Calgary’s Dustin Yeager sit in a tie for fourth at 5-under.

Bartman currently holds a two-stroke lead in the Mid Master (40+) division over Bunker who fired a 6-under 65 on Wednesday.

In the Inter-Provincial team competition, Team Ontario’s Tyler McDannold of Brooklin, Ont., Michael Rutgers of Windsor, Ont., and Darren Shaw of Stoney Creek, Ont., captured the R. Bruce Forbes trophy after a firing a 3-under 139 second round. The squad finished at 3-under 281 for the championship, eight strokes ahead of Nova Scotia’s Trevor Chow of Hammonds Plains, N.S., Glenn Robinson of Middle Sackville, N.S., and Greg Black of Halifax, N.S.