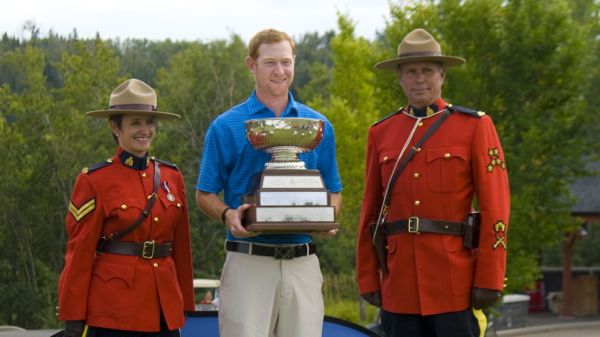 Kevin Carrigan successfully defended his Canadian Men’s Mid-Amateur title after carding a final round 5-under 66 at Blackhawk Golf Club on Friday.

The defending champion never relinquished the lead over 72 holes and set a new tournament scoring record finishing at 20-under 264 for the tournament, 11 strokes ahead of Garrett Rank and Michael Rutgers.

“It feels fantastic, little bit of a different feeling from last year, it was a little more of a grind last year but this year I brought my A-game,” Carrigan said. “There wasn’t a flaw at all as far as I could see, I missed couple of shots like everyone does but mentally I was tough and grinded the heck out of it.”

Carrigan opened the tournament on Tuesday by setting a new course record after firing a 8-under 63 and never backed down posting three straight round in the 60’s. His final round 5-under 66 was highlighted by a 5-under 31 closing nine and a birdie on the par-4 18th hole.

“I played great, the big thing for me and the one thing I’m the most proud of is that I never took my foot off the pedal,” he said. “It’s easy to get complacent and make mistakes coming down the stretch with a big lead.”

With the victory, the Victoria, B.C., native earns an exemption into the 2014 RBC Canadian Open at Royal Montreal Golf Club.

“It’s pretty exciting, it’s second to winning a national championship and I appreciate this more than anything in the world, what an unbelievable experience,” he continued.

Team Canada’s Garrett Rank of Elmira, Ont., and Michael Rutgers of Windsor, Ont., finished in a tie for second a 9-under 275. Rutgers carded a final round 4-under 67, while Rank stumbled on Friday, carding a 3-over 74.

David Bartman of Los Angeles, Calif., finished in solo fourth at 1-under 283 after a 6-over 77 final round. The California native also captured the Mid-Master (40+) title by three strokes over Rob Cowan of Waterloo, Ont.

Final results from the 2013 Canadian Men’s Mid-Amateur Championship can be found here.